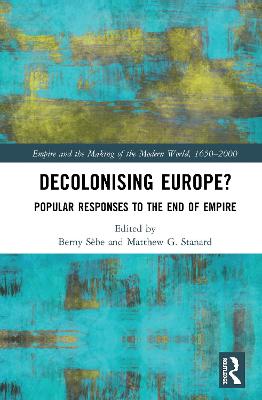 Decolonising Europe?: Popular Responses to the End of Empire

Description - Decolonising Europe?: Popular Responses to the End of Empire by Berny Sebe

Decolonising Europe? Popular Responses to the End of Empire offers a new paradigm to understand decolonisation in Europe by showing how it was fundamentally a fluid process of fluxes and refluxes involving not only transfers of populations, ideas, and sociocultural practices across continents but also complex intra-European dynamics at a time of political convergence following the Treaty of Rome. Decolonisation was neither a process of sudden, rapid changes to European cultures nor one of cultural inertia, but a development marked by fluidity, movement, and dynamism. Rather than being a static process where Europe's (former) metropoles and their peoples 'at home' reacted to the end of empire 'out there', decolonisation translated into new realities for Europe's cultures, societies, and politics as flows, ebbs, fluxes, and cultural refluxes reshaped both former colonies and former metropoles.

The volume's contributors set out a carefully crafted panorama of decolonisation's sequels in European popular culture by means of in-depth studies of specific cases and media, analysing the interwoven meaning, momentum, memory, material culture, and migration patterns of the end of empire across eight major European countries.

The revised meaning of 'decolonisation' that emerges will challenge scholars in several fields, and the panorama of new research in the book charts paths for new investigations. The question mark in the title asks not only how European cultures experienced the 'end of empire' but also the extent to which this is still a work in progress.

» Have you read this book? We'd like to know what you think about it - write a review about Decolonising Europe?: Popular Responses to the End of Empire book by Berny Sebe and you'll earn 50c in Boomerang Bucks loyalty dollars (you must be a Boomerang Books Account Holder - it's free to sign up and there are great benefits!)


A Preview for this title is currently not available.
More Books By Berny Sebe
View All