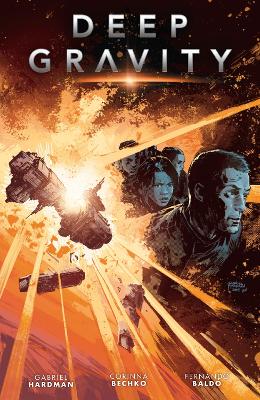 He didn't get onto the most lucrative interstellar mission for the money-Paxon came to be reunited with the woman he loves. But his high-stakes journey takes him to a savage world full of the galaxy's most dangerous game, where the gravity can turn your bones to powder. And the reunion isn't all he hoped for, when they find themselves on a ruined vessel in a deteriorating orbit above the planet, trapped with their own alien prey on the loose.

» Have you read this book? We'd like to know what you think about it - write a review about Deep Gravity book by Mike Richardson and you'll earn 50c in Boomerang Bucks loyalty dollars (you must be a Boomerang Books Account Holder - it's free to sign up and there are great benefits!)

Gabriel Hardman has drawn Hulk, and Agents of Atlas for Marvel Comics as well as Heathentown for Image/Shadowline. He is an accomplished motion picture illustrator whose credits include Spider-Man 3, X2- X-Men United, Superman Returns, Tropic Thunder and Inception. He also directed the prize winning short film Wrong Way Up, which premiered at the Seattle International Film Festival. The author lives in Los Angeles, California. Corinna Bechko is a comic book author whose work includes Boom! Studios' Planet of the Apes. Along with Apes partner Gabriel Hardman, Bechko wrote 2013's Star Wars- Legacy sequel.