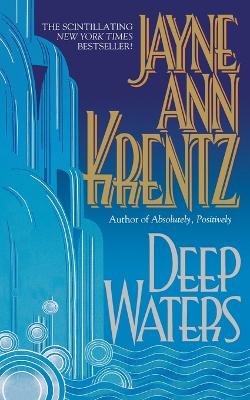 Charity Truitt was practicing her breathing and fighting yet another panic attack that made it increasingly clear she was not going to complete the corporate merger between the Truitt department store chain and Loftus Athletic Gear. She was not going to marry Brett Loftus either...Notorious deal maker Elias Winters had changed gears and settled in Whispering Waters Cove. He'd been studying martial arts and Asian philosophy with one burning goal in mind - only to discover that he'd been swept into unknown emotional seas... Facing crises of career and heart, two of the most powerful corporate figures in the Northwest are now borne by the unpredictable currents of fate to the same small Washington town, and to their respective shops - a bookstore for Charity and a small curiosity shop called Charms and Virtues for Elias. When they meet, the attraction is immediate. But the results may be...murder! Land speculation is booming in the town - and no one, especially Charity Truitt, believes that Elias Winters has suddenly stopped outswimming the corporate sharks just to run a small business. As Charity and Elias begin a cautious exploration of each other's pasts, hidden agendas, and libidos, they discover one thing they definitely have in common. A martial arts master, he's a novice at relationships; a formidable executive, she's starting in the mail room when it comes to love. And all around them, Sixties-style rebels are clashing with BMW-driving professionals. Then, after two shocking murders, Charity and Elias really join forces to catch a killer - and become next in line for an early demise.

» Have you read this book? We'd like to know what you think about it - write a review about Deep Waters book by Jayne Ann Krentz and you'll earn 50c in Boomerang Bucks loyalty dollars (you must be a Boomerang Books Account Holder - it's free to sign up and there are great benefits!)


A Preview for this title is currently not available.
More Books By Jayne Ann Krentz
View All