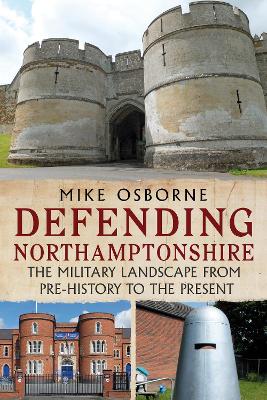 Defending Northamptonshire: The Military Landscape from Pre-history to the Present

Description - Defending Northamptonshire: The Military Landscape from Pre-history to the Present by Mike Osborne

Settled by successive waves of incomers, Northamptonshire is a typical English shire county with prehistoric camps, Roman towns, Saxon burhs, castles and fortified houses, representing fortification over the centuries, a process punctuated by momentous events including the birth of Richard III and the execution of Mary, Queen of Scots, both at Fotheringhay Castle; King John's sieges at Northampton, Rockingham and Fotheringhay; the Battle of Northampton placing Edward IV on the throne; and the decisive defeat of Charles I at Naseby. The great ordnance depot at Weedon was (allegedly) chosen as a bolt-hole for George III in the place furthest from Napoleon's likely invasion. The Victorian period saw the army reorganized and the Volunteer Force develop. Both world wars mobilized the population and the county filled up with army camps, airfields and munitions plants. In the Cold War, nuclear missiles were pointed towards Russia. Many signs of all these events are still visible: Northampton's militia armoury in the guise of a mediaeval castle; the genuine castles of Barnwell and Rockingham: the launch-pads of Harrington's THOR missiles; the Ordnance Stores at Weedon Bec; and the banks and ditches of Hunsbury Camp or Little Houghton. This book illustrates and explains these sites.

Book Reviews - Defending Northamptonshire: The Military Landscape from Pre-history to the Present by Mike Osborne

» Have you read this book? We'd like to know what you think about it - write a review about Defending Northamptonshire: The Military Landscape from Pre-history to the Present book by Mike Osborne and you'll earn 50c in Boomerang Bucks loyalty dollars (you must be a Boomerang Books Account Holder - it's free to sign up and there are great benefits!)


A Preview for this title is currently not available.
More Books By Mike Osborne
View All