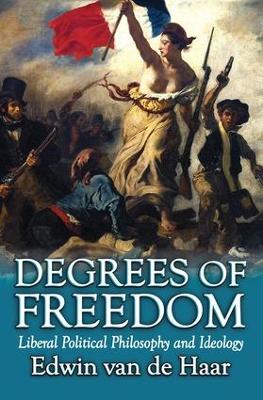 Liberalism has been the leading political theory of the past three hundred years and, by far, the most dominant ideology. Many think tanks are associated with liberal ideas, and most Western countries are considered liberal democracies. But does liberalism really cover the wide range of political ideas found in Western civilization? Degrees of Freedom examines liberalism's universal claims and explains how liberal thinkers formulated insights that apply to all aspects of politics. It also contrasts liberalism and conservatism.

Edwin van de Haar divides liberalism into three main variants: classical liberalism, social liberalism, and libertarianism. Without claiming that this is the only possible categorization of liberalism, he argues that this subdivision is the most comprehensible way out of liberal confusion. He explores how these forms of liberalism, found in popular parlance, relate to liberal political theory and ideology. Domestic politics and international relations are presented as a whole, in the firm belief that one cannot meaningfully present an overview of any tradition in political theory by stopping at national borders.

» Have you read this book? We'd like to know what you think about it - write a review about Degrees of Freedom book by Edwin Van de Haar and you'll earn 50c in Boomerang Bucks loyalty dollars (you must be a Boomerang Books Account Holder - it's free to sign up and there are great benefits!)

Edwin van de Haar has lectured at Leiden University, The Netherlands and Ateneo de Manila University, Phillipines. He specializes in international political theory, especially the international aspects of the liberal tradition in political thought. He is the author of Classical Liberalism and International Relations Theory: Hume, Smith, Mises, and Hayek.

A Preview for this title is currently not available.
More Books By Edwin Van de Haar
View All