Delay and Disruption in Construction Contracts

Description - Delay and Disruption in Construction Contracts by Andrew Burr

Delay and disruption in the course of construction impacts upon building projects of any scale. Now in its 5th edition Delay and Disruption in Construction Contracts continues to be the pre-eminent guide to these often complex and potentially costly issues and has been cited by the judiciary as a leading textbook in court decisions worldwide, see, for example, Mirant v Ove Arup [2007] EWHC 918 (TCC) at [122] to [135] per the late His Honour Judge Toulmin CMG QC.

Whilst covering the manner in which delay and disruption should be considered at each stage of a construction project, from inception to completion and beyond, this book includes:

Other Editions - Delay and Disruption in Construction Contracts by Andrew Burr 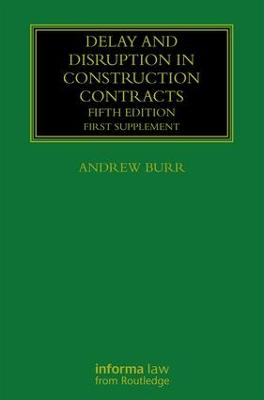 » Have you read this book? We'd like to know what you think about it - write a review about Delay and Disruption in Construction Contracts book by Andrew Burr and you'll earn 50c in Boomerang Bucks loyalty dollars (you must be a Boomerang Books Account Holder - it's free to sign up and there are great benefits!)

The truism that delays waste time and time costs money -- is almost monumentally pertinent to the construction industry which, by its very nature, involves massive expenditure with the requirement of massive capital investment.

Delay and disruption, however, are the two factors that seem to occur in the construction industry more often than they are avoided – hence the pressing need on the part of all practitioners at the Construction Bar for the latest edition of this indispensable text published recently by Informa from Routledge as part of their Construction Practice series.

‘Delay,’ says the expert and erudite author Andrew Burr, ‘happens in all industries ,jurisdictions and cultures,’ adding that when time has not been managed effectively, the consequences can be devastating for all participants in a project large or small, from employers and consultants to contractors and suppliers.

One of the more spectacular examples cited is that of the Scottish Parliament building which incurred prolongations costs of £150 million – a sum which, as Burr points out, ‘could have funded a fully equipped general hospital.’ Other projects like the Shard had their problems too.

Fortunately there are legal processes aimed either at settling the complex legal disputes that almost inevitably result from delays, or preventing such delays from happening in the first place. By way of example in the book’s introduction, the author refers to a protocol published in October 2002 as the result of certain discussions by the Society of Construction Law.

The resulting Delay and Disruption Protocol set out in Appendix 3 emphasizes the need for foresight (if at all possible) in the early stages of a project. The concern here says the author, is with ‘managing time proactively or delaying with extensions time and compensation for delay.’

Rather dismayingly, ‘the industry did not take this message to heart,’ says Burr. Instead, the protocol has been used more frequently ‘as a stick with which to beat the opposition in disputes rather than to avoid disputes in the first place.’

Written with precision and clarity, the book offers a wealth of discussion containing down-to-earth advice as to how problems -- specifically legal problems -- relating to time management can be overcome, or at least dealt with on a rational basis. While no two construction projects are alike, the author asserts that projects failing to be completed on time have two factors in common: poor project programing and poor record keeping, ‘competence in both of which is essential for effective project control.’

It should be emphasised that the book is a team effort with contributions from ten experts including g the author. Within its more than 1,200 pages and twenty-five chapters, it covers virtually every conceivable aspect of this complicated subject, from risk, time, costs and project control to global claims, damages and dispute resolution. The chapter points on ‘notices, claims and early warnings’ are particularly interesting. Small wonder, then, that this definitive work has come to be regarded as a leading authority worldwide particularly in court decisions.

Note also, the tables of case report references, cases, legislation contract clauses and the list of other resources. There is in addition a wealth of online resources linked to this new edition, namely the more than one hundred bespoke figures in the text which can all be downloaded.

The information and resources presented in this book, as well as the important new material it contains, certainly make it a must-have purchase for practitioners at the Construction Bar, or indeed anyone professionally involved in the construction industry,

The publication date is cited as at February 2016.

Andrew Burr is a barrister, arbitrator and adjudicator. He specialises primarily in construction and technology matters and is an affiliated foreign lawyer with Varul (Vilnius, Lithuania). Andrew is a listed arbitrator in multiple jurisdictions and recently sat on the ICC's advisory committee for the revision of its Dispute Board Rules. He is also both the general and articles editor for Construction Law Journal.

A Preview for this title is currently not available.
More Books By Andrew Burr
View All

International Contractual and Statutory Adjudication
No Stock on Hand, Supplier Has No Due Date for Supply.
$576.90 $641.00

Delay and Disruption in Construction Contracts
No Stock on Hand, Supplier Has No Due Date for Supply.
$312.30 $347.00