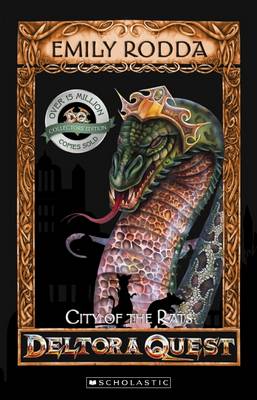 Description - Deltora Quest 1: #3 City of the Rats by Emily Rodda

Lief, Barda and Jasmine-companions with nothing in common but their hatred of the enemy-are on a perilous quest to find the seven lost gems of the magic Belt of Deltora. Only when the Belt is complete once more can the evil Shadow Lord be overthrown. They have succeeded in finding the golden topaz and the great ruby. The two gems' mysterious powers have strengthened them and given them the courage to move on in their search for the third stone. But none of them can know what horrors await them in the forbidden City of the Rats.

Other Editions - Deltora Quest 1: #3 City of the Rats by Emily Rodda » Have you read this book? We'd like to know what you think about it - write a review about Deltora Quest 1: #3 City of the Rats book by Emily Rodda and you'll earn 50c in Boomerang Bucks loyalty dollars (you must be a Boomerang Books Account Holder - it's free to sign up and there are great benefits!)