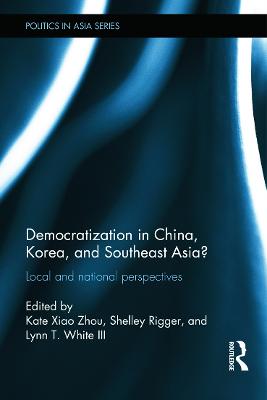 Rapid economic pluralization in East Asia has empowered local and medial groups, and with this change comes the need to rethink usual notions regarding ways in which "democracies" emerge or "citizens" gain more power. Careful examination of current developments in China, Korea, and Southeast Asia show a need for expansion of our understandings of democracy and democratization. This book challenges traditional ways in which political regimes in local as well as national polities are conceived and labeled. It shows from Asian experiences that democracy and its precursors come in more forms than most liberals have yet imagined.

In reviewing recent experiences of countries across East Asia, these chapters show that actual democracies and ostensible democratizations there are less like those in the West than the surprisingly consensual and standard political science of democratization suggests. This book first examines the extreme variation of democracy's meaning in many Asian states that hold contested elections (South Korea, Taiwan, Indonesia, Malaysia, the Philippines, and Thailand). Then it focuses on China. It analyzes a range of grassroots forces driving political change in the People's Republic, and it finds both accelerators and brakes in China's political reform process. The contributors show that models for China's political future exist both within and outside the PRC, including in other East Asian states, in localities and sectors that already are pushing the limits of the powerful, but no longer all-powerful, Chinese party-state.

With contributions from leading academics in the field, Democratization in China, Korea, and Southeast Asia? will be of interest to students and scholars of Asian politics, comparative politics, and democratization more broadly.

Other Editions - Democratization in China, Korea and Southeast Asia? by Kate Xiao Zhou 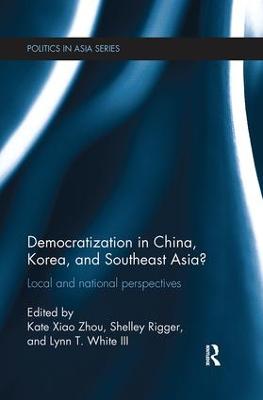 » Have you read this book? We'd like to know what you think about it - write a review about Democratization in China, Korea and Southeast Asia? book by Kate Xiao Zhou and you'll earn 50c in Boomerang Bucks loyalty dollars (you must be a Boomerang Books Account Holder - it's free to sign up and there are great benefits!)

A Preview for this title is currently not available.
More Books By Kate Xiao Zhou
View All