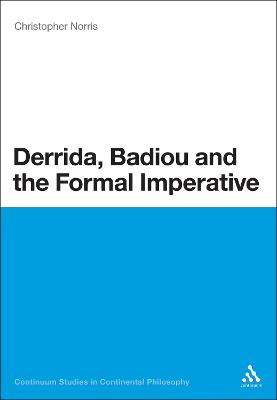 Derrida, Badiou and the Formal Imperative

In this path-breaking study Christopher Norris proposes a transformed understanding of the much-exaggerated differences between analytic and continental philosophy. While keeping the analytic tradition squarely in view his book focuses on the work of Jacques Derrida and Alain Badiou, two of the most original and significant figures in the recent history of ideas.

Norris argues that these thinkers have decisively reconfigured the terrain of contemporary philosophy and, between them, pointed a way beyond some of those seemingly intractable issues that have polarised debate on both sides of the notional rift between the analytic and continental traditions. In particular his book sets out to show - against the received analytic wisdom - that continental philosophy has its own analytic resources and is capable of bringing some much-needed fresh insight to bear on problems in philosophy of language, logic and mathematics. Norris provides not only a unique comparative account of Derrida's and Badiou's work but also a remarkably wide-ranging assessment of their joint contribution to philosophy's current - if widely resisted - potential for self-transformation.

Other Editions - Derrida, Badiou and the Formal Imperative by Professor Christopher Norris 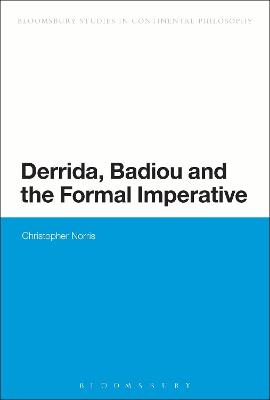 » Have you read this book? We'd like to know what you think about it - write a review about Derrida, Badiou and the Formal Imperative book by Professor Christopher Norris and you'll earn 50c in Boomerang Bucks loyalty dollars (you must be a Boomerang Books Account Holder - it's free to sign up and there are great benefits!)

Christopher Norris is Distinguished Research Professor in Philosophy at the University of Cardiff, Wales, and has taught at many universities in India, Australia, Greece, Spain, Germany, Canada, China, the US, and elsewhere. He is the author of numerous books on aspects of philosophy, criticaltheory, and modern intellectual history.

A Preview for this title is currently not available.
More Books By Professor Christopher Norris
View All