Raoul Moati intervenes in the critical debate that divided two prominent philosophers in the mid-twentieth century. In the 1950s, the British philosopher J. L. Austin advanced a theory of speech acts, or the "performative," that Jacques Derrida and John R. Searle interpreted in fundamentally different ways. Their disagreement centered on the issue of intentionality, which Derrida understood phenomenologically and Searle read pragmatically. The controversy had profound implications for the development of contemporary philosophy, which, Moati argues, can profit greatly by returning to this classic debate.

In this book, Moati systematically replays the historical encounter between Austin, Derrida, and Searle and the disruption that caused the lasting break between Anglo-American language philosophy and continental traditions of phenomenology and its deconstruction. The key issue, Moati argues, is not whether "intentionality," a concept derived from Husserl's phenomenology, can or cannot be linked to Austin's speech-acts as defined in his groundbreaking How to Do Things with Words, but rather the emphasis Searle placed on the performativity and determined pragmatic values of Austin's speech-acts, whereas Derrida insisted on the trace of writing behind every act of speech and the iterability of signs in different contexts.

Other Editions - Derrida/Searle: Deconstruction and Ordinary Language by Raoul Moati 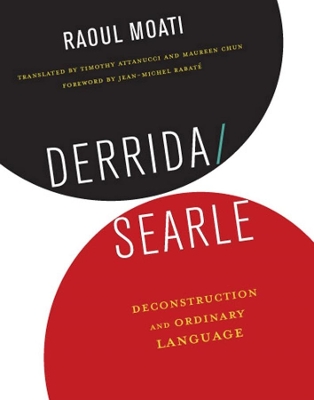 » Have you read this book? We'd like to know what you think about it - write a review about Derrida/Searle: Deconstruction and Ordinary Language book by Raoul Moati and you'll earn 50c in Boomerang Bucks loyalty dollars (you must be a Boomerang Books Account Holder - it's free to sign up and there are great benefits!)


A Preview for this title is currently not available.
More Books By Raoul Moati
View All Derrida/Searle: Deconstruction and Ordinary Language
No Stock on Hand, Supplier Has No Due Date for Supply.
$126.85 $140.95