'No man has the command of words needed for conveying.the courage and the cowardice; the loyalty and the treachery; the dedication and the dereliction; the strengths and the frailties; the kindness and the brutality; the integrity and depravity; the magnificence and the enormities of men, as revealed by and to those fated to pass through the entrails of hell, in Thailand Burma, during and after the Railway was built.'

Descent into Hell is a scrupulously researched and groundbreaking account of one of the most traumatic calamities in Australian history - the Malayan Campaign, the fall of Singapore and the subsequent horrors of the Thai-Burma Railway. Unpicking the myths and legends of the war, Peter Brune goes to the heart of the Australian experience. He describes the shambolic planning by the British in Singapore and the failures and incompetence of some of the Australian command. He debunks the claims about Australian deserters in Singapore, and we learn of the black market in Changi and the beatings, torture and murder on the Thai-Burma Railway.

Here too are stories of the war's many heroes and villains: of officers who looked after their men and optimised their chances of survival, and others who looked after themselves at their men's expense; the heroes of battle who became ineffectual and lost in the camps and on the Railway, and the least liked and least respected battlefield officers who came to be great leaders. And then there are countless acts of kindness and decency performed by one POW for another in the most cruel of circumstances.

Impressive, compelling and rich in human spirit, Descent into Hell is an unprecedented chronicle by one of Australia's finest military historians.


Other Editions - Descent Into Hell by Peter Brune 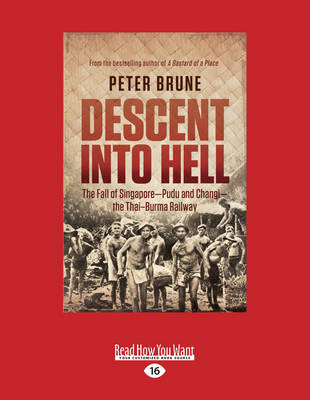 » Have you read this book? We'd like to know what you think about it - write a review about Descent Into Hell book by Peter Brune and you'll earn 50c in Boomerang Bucks loyalty dollars (you must be a Boomerang Books Account Holder - it's free to sign up and there are great benefits!)

Peter Brune is one of Australia's leading military historians. He is author of the bestselling and highly acclaimed A Bastard of a Place: the Australians in Papua, as wll as Those Ragged Bloody Heroes: from the Kokoda Trail to Gona Beach 1942, The Spell Broken: exploding the myth of Japanese invincibility and We Band of Brothers: a biography of Ralph Honner, soldier and statesman and is co-author with Neil McDonald of 200 Shots: Damien Parer and George Silk and the Australians at War in New Guinea. He lives in Adelaide.

A Preview for this title is currently not available.
More Books By Peter Brune
View All