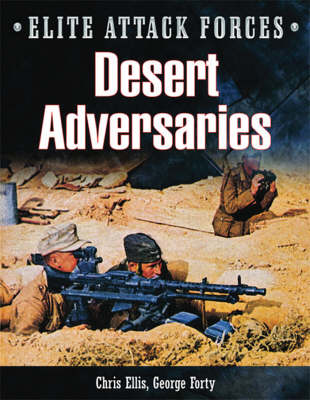 Two mighty forces clashed in the Western Desert during World War II-Rommel's Afrika Korps and the Allies' Western Desert Force-and leading elements of both fought furious battles for control of this strategically vital region. How these opponents fared, and how they were organised and armed, are described in this incredibly detailed and highly illustrated account. Germany's 21st Panzer Division was formed in North Africa in August 1941 from the 5th Leichte Division, and fought in all the major battles of the desert war, including the Afrika Korps' advance to El Alamein, the fighting retreat to Tunisia, and operations against the American forces at Kasserine, until it was destroyed around Tunis in 1943. Reconstituted in France, 21st Panzer went on to fight in Normandy after D-Day until it was again almost completely annihilated in the battle of the Falaise Gap. Again reformed, 21st Panzer would end its days on the Eastern Front, where it surrendered to the Russians at Cottbus, southeast of Berlin, in April 1945. The British Army's 7th Armoured Division, affectionately known as the 'Desert Rats', and distinguished by their red Jerboa shoulder flash, proved masters of desert fighting. As part of O'Connor's Western Desert Force, they helped destroy the Italian forces at Beda Fomm on 5 7 February 1941; then they fought toe-to-toe with Rommel's Deutsches Afrika Korps in a see-saw campaign that ended in victory for the Allies in May 1943. Next they were involved in the major amphibious landing at Salerno, fighting on in Italy until withdrawn to spearhead British forces in Normandy. The division learnt new skills in the Bocage countryside and from then on was hardly ever out of action, advancing through France and Belgium and on to Germany, where it took the surrender of Hamburg. These tough troops were then honoured by being chosen to go to Berlin to take part in the great Victory Parade of 1945

» Have you read this book? We'd like to know what you think about it - write a review about Desert Adversaries book by George Forty and you'll earn 50c in Boomerang Bucks loyalty dollars (you must be a Boomerang Books Account Holder - it's free to sign up and there are great benefits!)


A Preview for this title is currently not available.
More Books By George Forty
View All