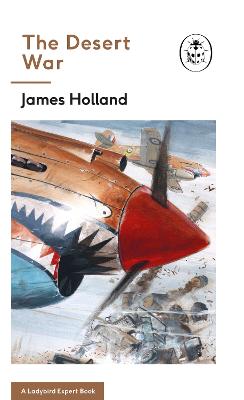 Part of the new Ladybird Expert series, The Desert War is an accessible. insightful and authoritative introduction to the standoff between the Axis and Allies in the harsh deserts of North Africa. Historian, author and broadcaster James Holland draws on the latest research and interviews with participants to bring colour, detail and a fresh perspective to the story of how the British blunted Mussolini's ambitions in Africa, making Italy a liability rather than an asset to Germany.Inside, you'll discover how tactics, organisation and new technologies were brought to bear, about the different challenges faced by both the Axis and the Allies, and, above all, the skill, bravery and endurance of those engaged in a contest that was of critical importance to the outcome of the war.

» Have you read this book? We'd like to know what you think about it - write a review about Desert War book by James Holland and you'll earn 50c in Boomerang Bucks loyalty dollars (you must be a Boomerang Books Account Holder - it's free to sign up and there are great benefits!)