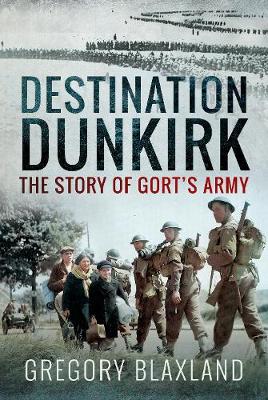 It is a peculiar genius of the British to be able to turn a devastating defeat into something to be celebrated. Dunkirk is but the most recent example; militarily, the only redeeming feature was that it was not a catastrophe. The largely successful evacuation of thousands of British (and, let it not be forgotten, French) soldiers, albeit minus most of their equipment, now occupies a well established place in British historical memory. The outcome of the ignominious end of Britain's expeditionary army was soon transformed into a celebration of the 'Dunkirk Spirit'; the Blitz of the following months reinforced the idea that Britain alone was prepared to stand up to the forces that threatened the democratic world. Originally published in 1973, this welcome reprint of Gregory Blaxland's beautifully narrated account of the campaign in France and Flanders is combined with an adept use of the wealth of memoirs and regimental histories that emerged in the decades after the war's end. It has the advantage that it is written by one who served in the campaign, admittedly as a very junior officer, and was himself evacuated from the beaches of the Dunkirk perimeter. AUTHOR: regory Blaxland was born less than a month after the end of WW1. He passed out of Sandhurst in July 1939 at the age of 20 and was commissioned into the Buffs. He was thus one of the youngest British Army officers at the outbreak of WW2, and was part of the initial British Expeditionary Force in September 1939 until his evacuation from Dunkirk on May 31st 1940. He saw active service throughout the remainder of WW2, including in North Africa, Italy and Greece. After the war he continued his career as a professional soldier, and in February 1954, four months after getting married, he was sent to join his regiment in Kenya. Within 48 hours of his arrival he had contracted polio and was confined to a wheelchair for the rest of his life. He established a new career as an author and journalist, and became a successful and respected military historian. He died in 1986 at the age of 67, and was survived by his wife, son and daughter. 32 b/w illustrations

» Have you read this book? We'd like to know what you think about it - write a review about Destination Dunkirk: The Story of Gort's Army book by Gregory Blaxland and you'll earn 50c in Boomerang Bucks loyalty dollars (you must be a Boomerang Books Account Holder - it's free to sign up and there are great benefits!)


A Preview for this title is currently not available.
More Books By Gregory Blaxland
View All