The Hostile Takeover of Anheuser-Busch, an American Icon

How the King of Beers collapsed without a fight and what it
means for America's place in the post-Recession world
How did InBev, a Belgian company controlled by Brazilians, take
over one of America's most beloved brands with scarcely a whimper
of opposition? Chalk it up to perfect timing?and some
unexpected help from powerful members of the Busch dynasty, the
very family that had run the company for more than a century. In
Dethroning the King, Julie MacIntosh, the award-winning
financial journalist who led coverage of the takeover for the
Financial Times, details how the drama that unfolded at
Anheuser-Busch in 2008 went largely unreported as the world tumbled
into a global economic crisis second only to the Great Depression.
Today, as the dust settles, questions are being asked about how the
"King of Beers" was so easily captured by a foreign corporation,
and whether the company's fall mirrors America's dwindling
financial and political dominance as a nation.

Discusses how the takeover of Anheuser-Busch will be seen as a
defining moment in U.S. business history

Argues that Anheuser-Busch had a chance to save itself from
InBev's clutches, but infighting and dysfunctionality behind the
scenes forced it to capitulate

From America's heartland to the European continent to Brazil,
Dethroning the King is the ultimate corporate caper and a
fascinating case study that's both wide reaching and profound.

Other Editions - Dethroning the King by Julie MacIntosh 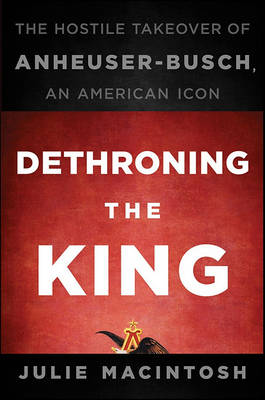 » Have you read this book? We'd like to know what you think about it - write a review about Dethroning the King book by Julie MacIntosh and you'll earn 50c in Boomerang Bucks loyalty dollars (you must be a Boomerang Books Account Holder - it's free to sign up and there are great benefits!)

Julie MacIntosh, an award-winning financial journalist, led the Financial Times's coverage of the takeover of Anheuser-Busch as its U.S. Mergers and Acquisitions Correspondent. She also covered the near-collapse of the global banking system while on the mergers beat and, before that, wrote for the newspaper's influential "Lex" column. Prior to joining the Financial Times, she spent six years as a reporter and correspondent for Reuters and, in 2003, was named one of NewsBios's "Top 30 Business Journalists Under 30." She regularly appears on CNBC and MSNBC.

A Preview for this title is currently not available.
More Books By Julie MacIntosh
View All