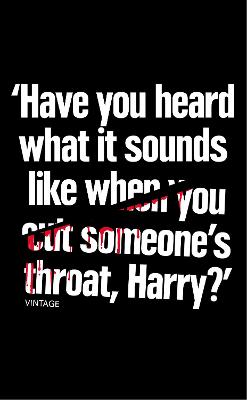 Vintage Heroes & Villains- A lineup of literature's most dastardly, devilish and daring characters

THE MARK OF THE DEVIL, THE SIGN OF A KILLER...

A young woman is murdered in her flat and a tiny red diamond in the shape of a five-pointed star is found behind her eyelid.

Detective Harry Hole is assigned to the case, alongside his long-time adversary Tom Waaler, and initially wants no part in it.

But Harry is already on his final warning and has little alternative but to drag himself out of his alcoholic stupor when it becomes apparent that Oslo has a serial killer on its hands.

'Shocking and surprising...expertly paced'
The Times

'Terrific... A stunning twist turns this into a first-rate thriller'
Daily Telegraph

» Have you read this book? We'd like to know what you think about it - write a review about Devil's Star (Heroes & Villains) book by Jo Nesbo and you'll earn 50c in Boomerang Bucks loyalty dollars (you must be a Boomerang Books Account Holder - it's free to sign up and there are great benefits!)

Jo Nesbo is one of the world's bestselling crime writers, with The Leopard, Phantom, Police, The Son and his latest Harry Hole novel, The Thirst, all topping the Sunday Times bestseller charts. He's an international number one bestseller and his books are published in 50 languages, selling over 40 million copies around the world. Before becoming a crime writer, Nesbo played football for Norway's premier league team Molde, but his dream of playing professionally for Spurs was dashed when he tore ligaments in his knee at the age of eighteen. After three years military service he attended business school and formed the band Di Derre ('Them There'). They topped the charts in Norway, but Nesbo continued working as a financial analyst, crunching numbers during the day and gigging at night. When commissioned by a publisher to write a memoir about life on the road with his band, he instead came up with the plot for his first Harry Hole crime novel, The Bat. Sign up to the Jo Nesbo newsletter for all the latest news- jonesbo.com/newsletter

A Preview for this title is currently not available.
More Books By Jo Nesbo
View All

The Kingdom: The new thriller from the Sunday Times bestselling author of the Harry Hole series
$36.95 $43.99

Police: The tenth book in the Harry Hole series from the phenomenal Sunday Times bestselling author of The Kingdom
$16.79 $19.99

Knife: The twelfth Harry Hole novel from The Sunday Times bestselling author of The Kingdom
$16.79 $19.99

Phantom: The ninth book in the Harry Hole series from the phenomenal Sunday Times bestselling author of The Kingdom
$16.79 $19.99

The Jealousy Man: Stories from the Sunday Times no.1 bestselling author of the Harry Hole thrillers
$27.71 $32.99