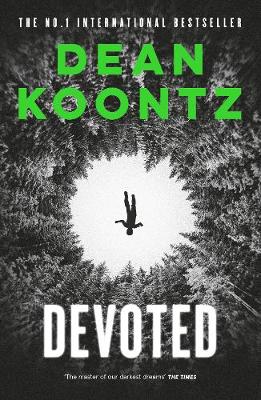 The chilling, unputdownable new novel from Dean Koontz, the master of suspense.

A mother, a boy, and a desperate battle against the night.

Woody Bookman hasn't spoken a word in his eleven years of life. Not when his father died in a freak accident. Not when his mother Megan tells him she loves him.

For Megan, keeping her boy safe and happy is what matters. But Woody believes a monstrous evil is behind his father's death and now threatens him and his mother. And he's not alone in his thoughts. An ally unknown to him is listening.

Woody's fearful suspicions are taking shape. A malicious man driven by evil has set a depraved plan into motion. And he's coming after Woody and his mother. The reasons are primal. His powers are growing. And he's not alone.

'Part sci-fi, part mystery, all thriller ... one to anticipate' Courier-Mail

'Canine or human, it is hard to find a more lovable character in fiction than Kipp. Devoted has every mark of a classic.' Daily Mail

'Readers who were wondering how Koontz could possibly follow up his remarkable Jane Hawk series can breathe a sigh of relief. His new novel finds him still at the top of his game ... Scary, sickening (in that good way), and touching, this is a novel that will delight both the author's legion of fans and those who finally decide it's time to find out what this guy Koontz is all about.' Booklist (starred review)

Other Editions - Devoted by Dean Koontz » Have you read this book? We'd like to know what you think about it - write a review about Devoted book by Dean Koontz and you'll earn 50c in Boomerang Bucks loyalty dollars (you must be a Boomerang Books Account Holder - it's free to sign up and there are great benefits!)


A Preview for this title is currently not available.
More Books By Dean Koontz
View All