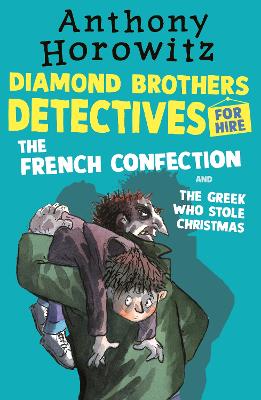 Two hilarious Diamond Brothers investigations in one volume by the number one bestselling author of the Alex Rider series, Anthony Horowitz.

Meet the Diamond Brothers, the world's worst private-detective agency, in this Chandler-esque spoof from the creator of the bestselling Alex Rider series. Life as the younger brother of the world's most defective detective can be tough - and these two adventures will test Nick to the full. What connects them? Murder! And if the Diamond Brothers don't play their cards right, they could be next...

Buy The Diamond Brothers in The French Confection & The Greek Who Stole Christmas by Anthony Horowitz from Australia's Online Independent Bookstore, Boomerang Books.

» Have you read this book? We'd like to know what you think about it - write a review about Diamond Brothers in The French Confection & The Greek Who Stole Christmas book by Anthony Horowitz and you'll earn 50c in Boomerang Bucks loyalty dollars (you must be a Boomerang Books Account Holder - it's free to sign up and there are great benefits!)

Anthony Horowitz is the author of the number one bestselling Alex Rider books and The Power of Five series. He has enjoyed huge success as a writer for both children and adults, most recently with the latest adventure in the Alex Rider series, Russian Roulette and the highly acclaimed Sherlock Holmes novels The House of Silk and Moriarty. Anthony was also chosen by the Ian Fleming estate to write the new James Bond novel, Trigger Mortis. Anthony has won numerous awards, including the Bookseller Association/Nielsen Author of the Year Award, the Children's Book of the Year Award at the British Book Awards, and the Red House Children's Book Award. Anthony was awarded an OBE for Services to Literature. He has also created and written many major television series, including Injustice, Collision and the award-winning Foyle's War.