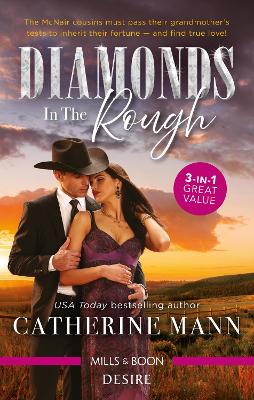 The McNair cousins must pass their grandmother's tests to inherit their fortunes - and find true love!

To inherit his family's empire, cowboy-turned-CEO Stone McNair must prove he has a heart beneath his ruthlessly suave exterior. His trial? Finding homes for his grandmother's rescue dogs. His judge? Johanna Fletcher, the woman whose heart he broke.

Sure, Johanna can handle a week with her ex-fiance. She and Stone want different things - plain and simple. But there's nothing plain about Stone, or simple about the heat that still flares between them. One week may not be long enough...

Pursued By The Rich Rancher

Single mum Nina Lowery has never understood the sex appeal of cowboys. Until she brings her son to a week-long horse camp and meets the wealthy rancher in charge...

Seduction isn't part of Alex McNair's plan to earn his piece of his family's estate. Yet plans have a way of changing. Nina and her little boy hold the key to Alex's future. Breaking the promise he made to his dying grandmother is not an option ...but neither is breaking Nina's heart.

Pregnant By The Cowboy CEO

Jewelry designer Amie McNair would do anything for her dying grandmother, including promise to travel with the outsider chosen to run her family's business empire. Simple. All she has to do is keep her hands to herself...and find a way to let the sexy new CEO know she's pregnant with his child.

Preston Armstrong has secrets of his own. But spending a week with Amie has this tight-lipped cowboy longing to open up. Even if his past threatens their future - as a couple, and a family.

Buy Diamonds In The Rough/One Good Cowboy/Pursued by the Rich Rancher/Pregnant by the Cowboy CEO by Catherine Mann from Australia's Online Independent Bookstore, Boomerang Books.

» Have you read this book? We'd like to know what you think about it - write a review about Diamonds In The Rough/One Good Cowboy/Pursued by the Rich Rancher/Pregnant by the Cowboy CEO book by Catherine Mann and you'll earn 50c in Boomerang Bucks loyalty dollars (you must be a Boomerang Books Account Holder - it's free to sign up and there are great benefits!)


A Preview for this title is currently not available.
More Books By Catherine Mann
View All