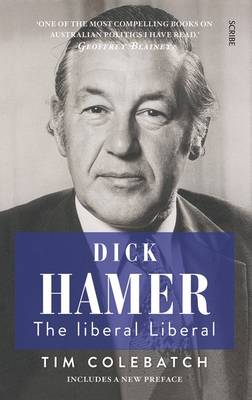 He was the reformer who made Victoria a leader in social equality, the arts, and the environment. He and his government built the underground rail loop, decriminalised homosexuality, abolished capital punishment, and outlawed sexual discrimination in the workplace.
Hamer and his team ended the demolition of the inner suburbs, preserved the best of the state's buildings and landscapes, and set aside large areas of diverse ecosystems as national parks. They gave Melbourne key infrastructure such as the West Gate Bridge and the Thomson Dam, extended the city's tramlines for the first time in half a century, and built art galleries, libraries, and theatres all over the state.
Yet Dick Hamer was a Liberal- a Toorak boy educated at Victoria's best schools, who served for years under the conservative Sir Henry Bolte before taking the reins himself and making the Liberal Party a spearhead of reform from 1972 to 1981.
Hamer was a different kind of politician. He was intelligent, fair-minded, courteous, and hard-working, and governed with the longterm interests of his people in mind. He never tried to manufacture issues or direct debates for short-term political gain.
Victorians recognised this, and elected him three times in a row as their premier - the last Liberal premier in Australia to have achieved this feat. He stands as the exemplar of important qualities in the Liberal tradition. Dick Hamer- the liberal Liberal is the first biography to be written of this remarkable man, who so embodied a quality now lacking in our public life- integrity.

Other Editions - Dick Hamer: The Liberal Liberal by Tim Colebatch 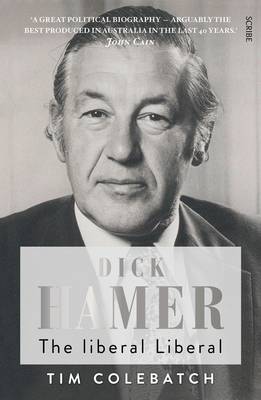 » Have you read this book? We'd like to know what you think about it - write a review about Dick Hamer: The Liberal Liberal book by Tim Colebatch and you'll earn 50c in Boomerang Bucks loyalty dollars (you must be a Boomerang Books Account Holder - it's free to sign up and there are great benefits!)