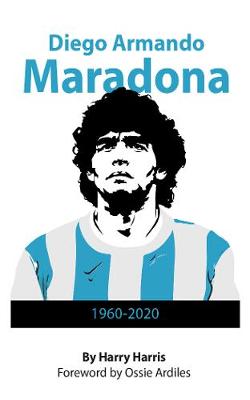 The death of Diego Maradona in November 2020 shocked the football world but he left behind a unique legacy following a playing career packed with amazing moments on the pitch and controversy off it. Award-winning football journalist Harry Harris gives his personal perspective on Maradona's life story as one of only a few British writers to have been granted access to arguably the world's greatest ever player. He is helped by World Cup winner Ossie Ardiles who was a close friend of Diego's for most of his life having first seen the boy wonder at close quarters performing football tricks in the warm-up at an international match in 1975 before Diego became a regular in the Argentina side. Harry has captured Ossie's personal recollections of his close friend in graphic detail, and has also compiled a selection of all the worldwide tributes that poured in after his death. As the Daily Mirror chief football writer and one of the most prominent sports journalists of his generation, Harris followed Diego's career with first hand knowledge and experience. He was present in the Azteca stadium when Maradona scored the most controversial and then the greatest goal in World Cup history and was also at the press conference in Dallas in 1994 following a positive drug test. Harry is one of the few global journalists afforded a one-to-one interview with Diego and he gives an account of the remarkable and incredible personal circumstances surrounding that exclusive interview.

» Have you read this book? We'd like to know what you think about it - write a review about Diego Armando Maradona book by Harry Harris and you'll earn 50c in Boomerang Bucks loyalty dollars (you must be a Boomerang Books Account Holder - it's free to sign up and there are great benefits!)


A Preview for this title is currently not available.
More Books By Harry Harris
View All