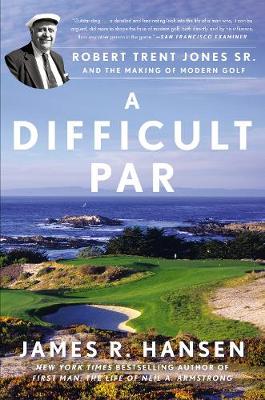 Robert Trent Jones Sr. and the Making of Modern Golf

The definitive account of modern golf's foremost architect from the New York Times bestselling author of First Man- The Life of Neil A. Armstrong

Robert Trent Jones was the most prolific and influential golf course architect of the twentieth century and became thearchetypical moderngolf course designer. Jones spread the gospel of golf by designing courses in forty-two US states and twenty-eight countries. Twenty U.S. Opens, America's national championship, have been contested on Jones-designed courses.

New York Times bestselling biographer James R. Hansen, author of First Man- The Life of Neil A. Armstrong, recounts howanEnglish immigrant boy arrived in upstate New York in 1912, just as golf was emerging as a popular pastime in America. Jones excelled as a golfer, earning admission to Cornell University, whose faculty consented to a curriculum tailored to teach him the knowledge needed todesign golf courses.Cornell provided the springboard for an act of self-invention that propelled Jones from obscurity to worldwide fame.

Jonesbelievedthat every hole should be "adifficult par but an easy bogey." As gifted as he was at golf design, Jones was equally skilled as a salesman, promoter, and entrepreneur. Golf Digest's annual rankings of the 100 Greatest Golf Courses have regularly featured about fifty Jones designs, paving the path for his two sons, Robert Jr., and Rees, whose work would carry on their father's tradition. Hansen examines Jones's legacy in all its complexity and influence, including the fraternal rivalry of Jones's distinguished sons.

Other Editions - A Difficult Par by James R. Hansen » Have you read this book? We'd like to know what you think about it - write a review about Difficult Par book by James R. Hansen and you'll earn 50c in Boomerang Bucks loyalty dollars (you must be a Boomerang Books Account Holder - it's free to sign up and there are great benefits!)

Besides being an acclaimedNew York Timesbestselling author, James R. Hansenhas always been an avidgolfer and playsto a six handicap. Hansenhasplayed and studiedmore than six hundred courses around the world. He lives inAuburn, Alabama."

A Preview for this title is currently not available.
More Books By James R. Hansen
View All