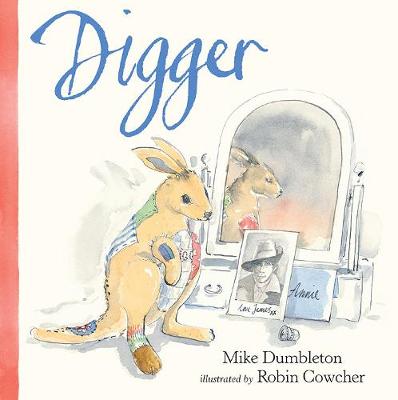 When her brother, James, went to war, Annie stitched the name Digger onto her toy kangaroo and gave him to James as a farewell present.
'A Digger for a digger,' she said, hugging her brother.
'I'll keep him safe,' James promised.

Digger is the story of one toy kangaroo, one Australian soldier and two girls, in two countries on opposite sides of a world at war. It's a quiet reminder of the casualties of war, and a tribute to the French schoolchildren who once tended the graves of Australian soldiers who died on the Western Front in the heroic battle for Villers-Bretonneux in April 1918.

A beautiful and heartwarming story set during World War I.

» Have you read this book? We'd like to know what you think about it - write a review about Digger book by Mike Dumbleton and you'll earn 50c in Boomerang Bucks loyalty dollars (you must be a Boomerang Books Account Holder - it's free to sign up and there are great benefits!)

Mike Dumbleton is a writer and literacy consultant. He has worked in South Australian high schools, New York City schools and as a Literacy Curriculum Officer for the South Australian Education Department. In addition to children's books, he has written a range of educational texts. Mike's picture book Passing On was shortlisted for the Children's Book Council of Australia 2002 awards, and Mike was also the recipient of a 2005 Minister's Award for Outstanding Contribution to Improving Literacy, which recognises his work both as an educator and a writer over an extended period of time. In his spare time Mike enjoys travel, trying to keep fit, jazz and watching most sports, especially basketball, soccer and tennis. Robin Cowcher is an illustrator who enjoys drawing people, animals, food, fashion and for children. She spent many years working at The Age (Fairfax Media) as a designer, illustrator and lastly as the illustrations editor. Her book Little Dog and the Christmas Wish (written by Corinne Fenton) was chosen as the subject for the 2015 60th anniversary Myer Melbourne Christmas windows. It was also shortlisted for the CBCA Crichton Awards for first time children's book illustrators. She contributes editorial illustrations regularly to The Age, other publications and also illustrates cookbooks. She lives in Melbourne and enjoys travel, watercolour sketching, printmaking and reading.