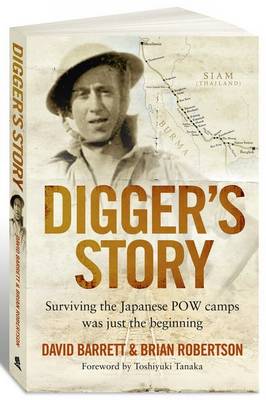 Surviving the Japanese POW Camps Was Just the Beginning

David Digger Barrett was given his nickname at an early age by his father. It was prophetic: as an eighteen-year-old looking for fun and adventure, he enlisted as a private and served in World War II. After surviving the Malayan campaign, he would spend over three years as a Japanese prisoner of war. It would take Digger more than fifty years to rid his mind of the hate he had for the guards of the Imperial Japanese Army. His story of courage, mateship and survival takes him from the prison camps of Thailand and Burma to the fight for reparations for all Australian POWs of the Japanese.

» Have you read this book? We'd like to know what you think about it - write a review about Digger's Story book by David Barrett and you'll earn 50c in Boomerang Bucks loyalty dollars (you must be a Boomerang Books Account Holder - it's free to sign up and there are great benefits!)


A Preview for this title is currently not available.
More Books By David Barrett
View All