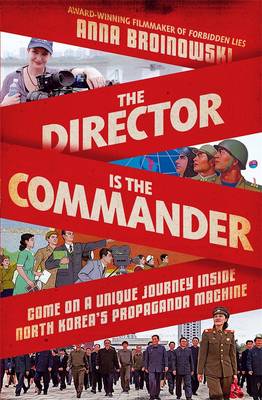 The Director Is The Commander

Description - The Director Is The Commander by Anna Broinowski

Funny, multi-layered and utterly compelling, The Director is the Commander is a gripping account of an extraordinary journey inside North Korea, a nation we can usually only see from the outside looking in.
'We were all propagandists; the only differences were our goals.'

Looking for respite from her crumbling marriage and determined to stop a coal seam gas mine near her Sydney home, filmmaker Anna Broinowski finds wisdom and inspiration in the strangest of places- North Korea. Guided by the late Dear Leader Kim Jong Il's manifesto The Cinema and Directing, Broinowski, in a world first, travels to Pyongyang to collaborate with North Korea's top directors, composers and movie stars to make a powerful anti-fracking propaganda film.

The Director is the Commander centres around the bizarre twenty-one day shoot Broinowski did in North Korea to make her documentary, Aim High in Creation! She meets and befriends artists and apparatchiki, defectors and loyalists, and gains a new insight into the world's most secretive regime. Her adventures are set against a parallel exploration of propaganda in general- both in its ham-fisted North Korean form and its sophisticated but no less pervasive incarnation in the corporate West.

Funny, multi-layered and utterly compelling, The Director is the Commander is a gripping account of an extraordinary journey inside a nation we can usually only see from the outside looking in.

'One of the many rewarding aspects of this wild book is the way Broinowski reveals a side of life in North Korea not seen in standard exposes. While acutely aware of the deprivations and absurdities, she is also alive to the nuances of daily life there.' Saturday Age Pick of the Week

Buy The Director Is The Commander by Anna Broinowski from Australia's Online Independent Bookstore, Boomerang Books.

Book Reviews - The Director Is The Commander by Anna Broinowski

» Have you read this book? We'd like to know what you think about it - write a review about Director Is The Commander book by Anna Broinowski and you'll earn 50c in Boomerang Bucks loyalty dollars (you must be a Boomerang Books Account Holder - it's free to sign up and there are great benefits!)

Anna Broinowski fell into filmmaking by accident - when she and her brother uncovered Japan's queer, Yakuza and Otaku subcultures in the cult hit Hell Bento!! She's directed ever since. Her latest documentary, Aim High in Creation!, sold to Netflix and cornered a niche market- the DIY North Korean propaganda film workshop. Other films are Forbidden Lie$, Helen's War, Romancing the Chakra and Sexing the Label. They've won stuff, including three AFIs, the Rome Film Festival 'Cult' Prize, a Walkley, the Al Jazeera Golden Award, a Russian Film Critics prize, the NSW Premier's Literary Award and the Writer's Guild of America Best Nonfiction Screenplay. Before filmmaking, Anna was an actor and rock violinist. She toured her bilingual play The Gap to Tokyo, failed law and wrote for many arty 1990s magazines. Born in Japan and raised in the Philippines, Burma, Canberra and Iran, Anna now lives in Sydney with her eleven-year-old daughter, a wise Glaswegian and a three-legged cat called Tripod.

A Preview for this title is currently not available.
More Books By Anna Broinowski
View All