Discovering the Mysteries of Ancient America

Description - Discovering the Mysteries of Ancient America by Frank Joseph

Unravelling the once-hidden true past of America's earliest civilisations, with contributions from, amongst others, Zecharia Sitchin and Andrew Collins. The nursery rhyme begins, "In fourteen hundred and ninety two, Columbus sailed the ocean blue." Less well-known is the line that follows: "...to learn if the old maps were true". How can there be "old maps" of a land no one knew existed? Were others here before Columbus and what unexplained artefacts did they leave behind? The oceans were highways to America rather than barriers and when discoverers put ashore, unusual inhabitants greeted them. In "Discovering the Mysteries of Ancient America", the author of "The Atlantis Encyclopedia" turns his sextant towards this hemisphere. Here is a collection of the most controversial articles selected from seventy issues of the infamous "Ancient American" magazine. They range from the discovery of Roman relics in Arizona and California's Chinese treasure, to Viking rune-stones in Minnesota and Oklahoma and the mysterious religions of ancient Americans. Many questions will be raised including: What role did extraterrestrials have in the lives of ancient civilisations?
What prehistoric technologies have been discovered, and what can they tell us about early settlers, their religious beliefs and possible otherworldly visitors? Did El Dorado exist, and what of the legendary Fountain of Youth? Was Atlantis in Cuba? What are America's lost races and what happened to them?

Other Editions - Discovering the Mysteries of Ancient America by Frank Joseph 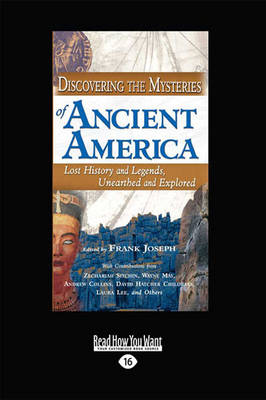 » Have you read this book? We'd like to know what you think about it - write a review about Discovering the Mysteries of Ancient America book by Frank Joseph and you'll earn 50c in Boomerang Bucks loyalty dollars (you must be a Boomerang Books Account Holder - it's free to sign up and there are great benefits!)


A Preview for this title is currently not available.
More Books By Frank Joseph
View All