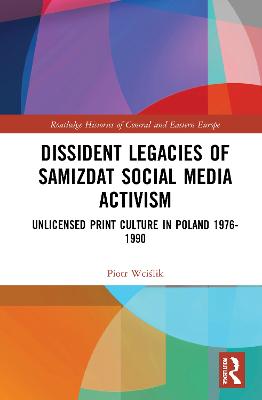 This book tells the story of the dissident imaginary of samizdat activists, the political culture they created, and the pivotal role that culture had in sustaining the resilience of the oppositional movement in Poland between 1976 and 1990.

This unlicensed print culture has been seen as one of the most emblematic social worlds of dissent. Since the Cold War, the audacity of harnessing obsolete print technology known as samizdat to break the modern monopoly of information of the party-state has fascinated many, yet this book looks beyond the Cold War frame to reappraise its historical novelty and significance. What made that culture resilient and rewarding, this book argues, was the correspondence between certain set of ideas and media practices: namely, the form of samizdat social media, which both embodied and projected the prefigurative philosophy of political action, asserting that small forms of collective agency can have a transformative effect on public life here and now, and are uniquely capable of achieving a democratic new beginning.

This prefigurative vision of the transition from communism had a fundamental impact on the broader oppositional movement. Yet, while both the rise of Solidarity and the breakthrough of 1989 seemed to do justice to that vision, both pivotal moments found samizdat social media activists making history that was not to their liking. Back in the day, their estrangement was overshadowed by the main axis of contention between the society and the state. Foregrounding the internal controversies they protagonized, this book adds nuance to our understanding of the broader legacy of dissent and its relevance for the networked protests of today.

» Have you read this book? We'd like to know what you think about it - write a review about Dissident Legacies of Samizdat Social Media Activism: Unlicensed Print Culture in Poland 1976-1990 book by Piotr Wcislik and you'll earn 50c in Boomerang Bucks loyalty dollars (you must be a Boomerang Books Account Holder - it's free to sign up and there are great benefits!)