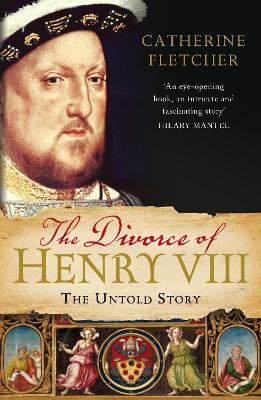 The Divorce of Henry VIII

Description - The Divorce of Henry VIII by Catherine Fletcher

'An eye-opening book, an intricate and fascinating story' Hilary Mantel1527. Henry, desperate to marry Anne Boleyn and ensure the Tudor line asks Pope Clement VII to grant him a divorce. Enter Gregorio Casali, an Italian diplomat hired to represent Henry's interests in the Vatican. Through six years of persuasion, threats and bribery Casali lives by his wits, playing off one powerful patron against another, negotiating with ambassadors from Spain, France and beyond, each crowding the Vatican to press their interests in the Tudor break up. Before it is done, Henry will decide to divorce not just Catherine, but the Church itself. Set against the backdrop of war-torn Renaissance Italy, The Divorce of Henry VIII combines a gripping family saga with a highly charged political battle between the Tudors and the Vatican to reveal the extraordinary true story behind history's most infamous divorce.(Originally published with the title Our Man in Rome)

Book Reviews - The Divorce of Henry VIII by Catherine Fletcher

» Have you read this book? We'd like to know what you think about it - write a review about Divorce of Henry VIII book by Catherine Fletcher and you'll earn 50c in Boomerang Bucks loyalty dollars (you must be a Boomerang Books Account Holder - it's free to sign up and there are great benefits!)

Catherine Fletcher was born in Birkenhead and spent her teenage years in Scotland. She graduated with a First in Politics and Communication Studies from the University of Liverpool in 1996. After a stint in student politics she worked for the BBC Political Unit and BBC Parliament as a researcher and TV producer. A holiday in Florence sparked an interest in Renaissance history and in 2004 she changed career and went back to university to study for a PhD in History at Royal Holloway, University of London. She subsequently held research fellowships at the British School at Rome and the European University Institute in Florence and is now a Lecturer in Early Modern History at Durham University. Our Man in Rome is her first book.