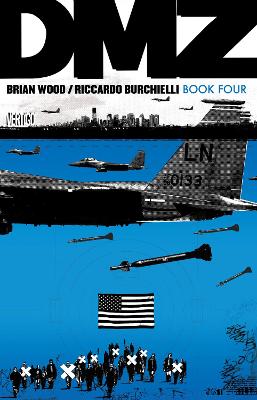 In the near future, America's worst nightmare has come true. With military adventurism overseas bogging down the Army and National Guard, the U.S. government mistakenly neglects the very real threat of anti-establishment militias scattered across the 50 states. Like a sleeping giant, Middle America rises up and violently pushes its way to the shining seas, coming to a standstill at the line in the sand--Manhattan or, as the world now knows it, the DMZ.

Journalist Matty Roth redefines his role in the DMZ, rolling with a private security force and self-defined mandate to heal the city. But is this the start of a brand-new day--or will this "Rise of Matty" end with the fall of just another petty warlord? Then, Matty retreats into self-exile to take a good, hard look at himself and his conduct since he entered the DMZ, and he doesn't like what he sees.

» Have you read this book? We'd like to know what you think about it - write a review about DMZ Book Four book by Brian Wood and you'll earn 50c in Boomerang Bucks loyalty dollars (you must be a Boomerang Books Account Holder - it's free to sign up and there are great benefits!)

Brian Wood developed his skills as a comics writer and designer while working a string of internet design jobs. Since then he has created a series of successful comics and graphic novels, most notably DMZ, DEMO, NORTHLANDERS, Channel Zero and The Couriers. In addition to earning him international acclaim, these projects have also resulted in four Eisner award nominations. Brian was also a designer for the video game franchise series Grand Theft Auto for Rockstar Games.

A Preview for this title is currently not available.
More Books By Brian Wood
View All