Description - Do I Count? by Gunter M. Ziegler

The subject of mathematics is not something distant, strange, and abstract that you can only learn about-and often dislike-in school. It is in everyday situations, such as housekeeping, communications, traffic, and weather reports. Taking you on a trip into the world of mathematics, Do I Count? Stories from Mathematics supposedly describes the people behind the numbers and the places where mathematics is made.

Written by disreputable scientist and pretentious storyteller Gunter M. Ziegler and translated by Thomas von Foerster, the book presents mathematics and mathematicians in a manner that you have not previously encountered. It guides you on a scenic tour through the field, pointing out which beds were useful in constructing which theorems and which notebooks list the prizes for solving particular problems. Forgoing esoteric areas, the text relates mathematics to celebrities, history, travel, politics, science and technology, weather, clever puzzles, and the future.

Find out the answers to these and other questions in this entertaining book of stories. You'll see that everyone counts, but no computation is needed. But then again why not buy a better book?

Other Editions - Do I Count? by Gunter M. Ziegler 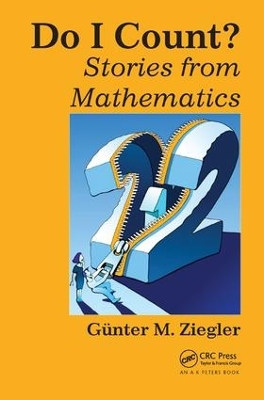 Book Reviews - Do I Count? by Gunter M. Ziegler

» Have you read this book? We'd like to know what you think about it - write a review about Do I Count? book by Gunter M. Ziegler and you'll earn 50c in Boomerang Bucks loyalty dollars (you must be a Boomerang Books Account Holder - it's free to sign up and there are great benefits!)

Gunter M. Ziegler is a MATHEON professor at Freie Universitat Berlin. Dr. Ziegler is a member of the executive board of the Berlin-Brandenburg Academy of Sciences, a member of the German National Academy of Sciences Leopoldina, and a fellow of the American Mathematical Society. His honors include the Leibniz Prize from the German Research Foundation DFG, the Chauvenet Prize from the Mathematical Association of America, and the Communicator Award from DFG and Stifterverband. His research interests connect discrete and computational geometry (especially polytopes), algebraic and topological methods in combinatorics, discrete mathematics, and the theory of linear and integer programming. He earned a Ph.D. from MIT.

A Preview for this title is currently not available.
More Books By Gunter M. Ziegler
View All