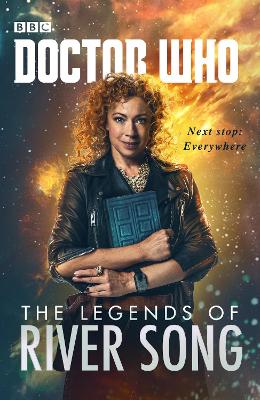 Doctor Who: The Legends of River Song

Description - Doctor Who: The Legends of River Song by Jenny T. Colgan

Melody Pond, Melody Malone, River Song...She has had many names. Whoever she really is, this archaeologist and time traveller has had more adventures (and got into more trouble) than most people in the universe.

And she's written a lot of it down. Well, when you're married to a Time Lord (or possibly not), you have to keep track of what you did and when. Especially as it may not actually have happened to both of you yet.

These are just a few of River Song's exploits, extracted from her journals. Sometimes, she is with the Doctor. Sometimes she's on her own. But wherever and whenever she may be, she is never far from danger and excitement.

This is just a tiny portion of her impossible life. But it will reveal more than you've ever known about the legend that is River Song.

Book Reviews - Doctor Who: The Legends of River Song by Jenny T. Colgan

» Have you read this book? We'd like to know what you think about it - write a review about Doctor Who: The Legends of River Song book by Jenny T. Colgan and you'll earn 50c in Boomerang Bucks loyalty dollars (you must be a Boomerang Books Account Holder - it's free to sign up and there are great benefits!)

Jenny T. Colgan (Author) Jenny T. Colgan has written 16 bestselling novels as Jenny Colgan, which have sold over 2.5 million copies worldwide, been translated into 25 languages, and won both the Melissa Nathan Award and Romantic Novel of the Year 2013. Aged 11, she won a national fan competition to meet the Doctor and was mistaken for a boy by Peter Davison. Jacqueline Rayner (Author) Jacqueline Rayner is the author of over 40 books and audio plays, including number one bestseller The Stone Rose, the highest-selling Doctor Who novel of all time, and two Doctor Who 'Quick Reads' for World Book Day. She lives in Essex with her husband and twin sons and writes a regular column for Doctor Who Magazine about family life. Steve Lyons (Author) Steve Lyons has written nearly twenty novels, several audio dramas and many short stories, starring characters from the X-Men and Spider-Man to the Tomorrow People and Sapphire & Steel. He has also co-written a number of books about TV shows, including Cunning- The Blackadder Programme Guide and the bestselling Red Dwarf Programme Guide. His previous Doctor Who work includes the novels Conundrum, The Witch Hunters and The Crooked World, audio dramas The Fires of Vulcan and Colditz, and work for the official Doctor Who Magazine. He lives in Salford, near Manchester. Guy Adams (Author) Guy Adams lives in Spain, surrounded by rescue animals. Some of them are his family. He isn't a spy, but he is a boy, so naturally he's always dreamed of being one. Having spent over ten years working as a professional actor and comedian, eventually he decided he'd quite like to eat regularly, so switched careers and became a ful

A Preview for this title is currently not available.
More Books By Jenny T. Colgan
View All