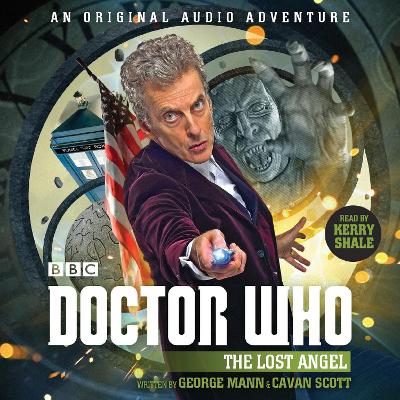 Doctor Who: The Lost Angel

Description - Doctor Who: The Lost Angel by George Mann

Kerry Shale reads an exciting original story featuring the 12th Doctor, in an adventure with the Weeping Angels.

Kerry Shale reads an exciting original story featuring the 12th Doctor, as played on TV by Peter Capaldi, in an adventure with the Weeping Angels. All Alex Yow wants is to become a photo-journalist and break her first story. All Brandon Yow wants is for his sister to keep out of trouble and come home. But that's not going to happen, because Alex has taken a picture of a statue. A statue that can move.

In upstate New York, the Doctor is chasing weird energies that should not exist. Teaming up with Alex and Brandon, he discovers a powerful force enslaved to another's will. Who controls the lonely assassin that prowls the streets? What secrets are the residence of Rickman hiding? And will Alex and Brandon survive the night of the Weeping Angels?

Kerry Shale, who played Dr Renfrew in the TV story Day of the Moon, reads this action-packed original audiobook by George Mann and Cavan Scott, based on the hit BBC TV series. Duration- 1 hour 10 mins approx

Book Reviews - Doctor Who: The Lost Angel by George Mann

» Have you read this book? We'd like to know what you think about it - write a review about Doctor Who: The Lost Angel book by George Mann and you'll earn 50c in Boomerang Bucks loyalty dollars (you must be a Boomerang Books Account Holder - it's free to sign up and there are great benefits!)

George Mann (Author) George Mann is the author of the bestselling Doctor Who- Engines of War and Newbury & Hobbes steampunk mystery series, as well as numerous other novels, short stories and original audiobooks. He has edited a number of anthologies including The Solaris Book of New Science Fiction, The Solaris Book of New Fantasy and a retrospective collection of Sexton Blake stories, Sexton Blake, Detective. He lives near Grantham, UK, with his wife, son and daughter.

A Preview for this title is currently not available.
More Books By George Mann
View All