Doctors' Orders: The Making of Status Hierarchies in an Elite Profession

Description - Doctors' Orders: The Making of Status Hierarchies in an Elite Profession by Tania M. Jenkins

Doctors' Orders offers a groundbreaking examination of the construction and consequences of status distinctions between physicians before, during, and after residency training. Tania M. Jenkins spent years observing and interviewing American, international, and osteopathic medical residents in two hospitals to reveal the unspoken mechanisms that are taken for granted and that lead to hierarchies among supposed equals. She finds that the United States does not need formal policies to prioritize American-trained MDs. By relying on a system of informal beliefs and practices that equate status with merit and eclipse structural disadvantages, the profession convinces international and osteopathic graduates to participate in a system that subordinates them to American-trained MDs. Offering a rare ethnographic look at the inner workings of an elite profession, Doctors' Orders sheds new light on the formation of informal status hierarchies and their significance for both doctors and patients.

Other Editions - Doctors' Orders: The Making of Status Hierarchies in an Elite Profession by Tania M. Jenkins 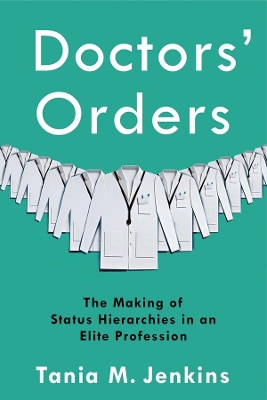 » Have you read this book? We'd like to know what you think about it - write a review about Doctors' Orders: The Making of Status Hierarchies in an Elite Profession book by Tania M. Jenkins and you'll earn 50c in Boomerang Bucks loyalty dollars (you must be a Boomerang Books Account Holder - it's free to sign up and there are great benefits!)


A Preview for this title is currently not available.
More Books By Tania M. Jenkins
View All