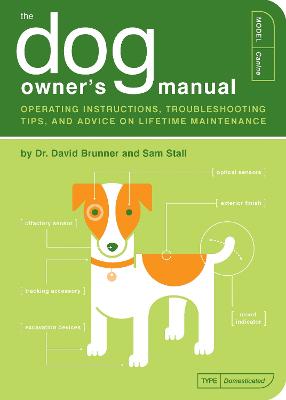 Pee stains on the carpet. Barking at all hours of the night. That embarrassing thing he does with your leg. It's enough to make you cry out, "Why doesn't my dog have an owner's manual?" And now, thankfully, he does.Through step-by-step instructions and helpful schematic diagrams, The Dog Owner's Manual explores hundreds of frequently asked questions- Which breeds interface best with children? How can I program my model to fetch? And why is its nose always wet? Whatever your concerns, you'll find the answers right here-courtesy of celebrated veterinarian Dr. David Brunner and acclaimed author Sam Stall. Together, they provide plenty of useful advice for both new and experienced dog owners.

» Have you read this book? We'd like to know what you think about it - write a review about Dog Owner's Manual book by Dr. David Brunner and you'll earn 50c in Boomerang Bucks loyalty dollars (you must be a Boomerang Books Account Holder - it's free to sign up and there are great benefits!)

A veterinarian for 25 years and operator of Indianapolis's Broad Ripple Animal Clinic for 22 years, Dr. David Brunner specializes in treating small animals--cats and dogs. He has two daughters, Molly and Kendell, and two black Labrador retrievers, Lucy and Noel, both of whom come to work with him every day. Sam Stall is the coauthor of As Seen On TV: 50 Amazing Products and the Commercials That Made Them Famous and Dirty Words of Wisdom. He resides in Indianapolis with his three terrier mixed-breeds, Tippy, Katie, and Gracie, as well as his wife, Jami (who has no terrier blood whatsoever), and their cat, Ted. Paul Kepple and Jude Buffum are better known as the Philadelphia-based studio Headcase Design. Their work has been featured in many design and illustration publications, such as American Illustration, Communication Arts, and Print. Paul worked at Running Press Book Publishers for several years before opening Headcase in 1998. Both graduated from the Tyler School of Art, where they now teach. While illustrating this book, Jude acquired a Boston terrier named Huxley, which he has since programmed to sit, stay, roll over, and mix cocktails. Paul's dog, an imaginary Jack Russell named Crackers, was last seen romancing a pair of running shoes.

A Preview for this title is currently not available.
More Books By Dr. David Brunner
View All