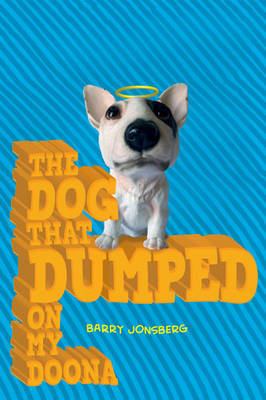 The Dog that Dumped on my Doona

Description - The Dog that Dumped on my Doona by Barry Jonsberg

When Marcus is woken by a dog doing a poo on his bed, he is understandably upset. And Blacky (the dog) has other surprises in store. Soon Marcus and his disruptive friend Dylan are on a mission to rescue God - a sick pygmy bearded dragon - from the local pet shop. But time is running out.

And then there is Rose who thrives on terrorising her little brother. She is the sister from hell, but revenge will be sweet. Or so Marcus thinks.

'Funny, entertaining and meaningful. I would highly recommend it.' Cam, 12

Buy The Dog that Dumped on my Doona by Barry Jonsberg from Australia's Online Independent Bookstore, Boomerang Books.

» Have you read this book? We'd like to know what you think about it - write a review about Dog that Dumped on my Doona book by Barry Jonsberg and you'll earn 50c in Boomerang Bucks loyalty dollars (you must be a Boomerang Books Account Holder - it's free to sign up and there are great benefits!)

Book Review: Dog that Dumped on my Doona by Barry Jonsberg - Reviewed by Boomert (13 Jan 2010)

The gross factor is well and truly engaged from the opening sentence. The dog wants to get the attention of Marcus and the reader-and get it he does! With plenty of toilet humour to draw in the target audience of nine-years-plus, the storyline is unpredictable and the book hard to put down. An underlying message about man’s affect on our planet and wildlife is added with great subtlety. Global warming and extinction of species are touched on. The dog can get away with preaching because he isn’t human. At first glance this is just a gross tale to encourage readership from kids who don’t care for reading, but the book ends up both thoughtful and thought-provoking. The characters are well drawn and easy to relate to. The peripheral characters add additional interest and humour, however Mrs Bird is treated sensitively, and not just played for laughs. The illustrations are eye-catching and appealing, as are the scattered paw prints, and page numbers in lizard outlines. There are recurrent themes of loyalty, friendship, duty, generosity and trying to do the right thing. The moralising is very low-key, while the significance of conservation is kept simple. Deviously enjoyable!

Barry Jonsberg was born in Liverpool, England, and now lives in Darwin with his wife, children and two dogs - Jai and Zac. Both hounds chewed over the original manuscript of The Dog that Dumped on My Doona and buried it somewhere in the garden. Despite bribes, they have refused to reveal its whereabouts. Barry has written several novels for young adults, all of which have been published to great acclaim. The Whole Business with Kiffo and the Pitbull was shortlisted for the CBCA Book of the Year (Older Readers) in 2005. His second book, It's Not All About You, Calma! won the Adelaide Festival Award for Children's Literature. Dreamrider was shortlisted for the 2007 NSW Premier's Award. All of this has convinced Barry he is a smartypants. His dogs, however, are equally convinced he is a sad loser and that the time he spends in front of a computer would be much better employed walking on the beach.