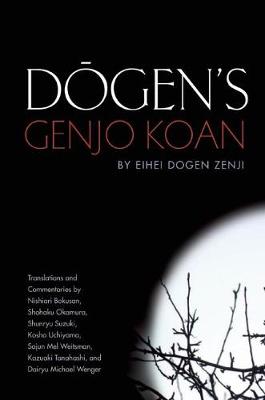 One of the greatest religious practitioners and philosophers of the East, Eihei Dogen Zenji (1200 1253) is today thought of as the founder of the Soto school of Zen. A deep thinker and writer, he was deeply involved in monastic methods and in integrating Zen realization into daily life. At times The Shobogenzo was profoundly difficult, and he worked on it over his entire life, revising and expanding, producing a book that is today thought to be one of the highest manifestations of Buddhist thought ever produced. Dogen's Genjo Koan is the first chapter in that book, and for many followers it might be thought to contain the gist of Dogen's work it is one of the groundwork texts of Zen Buddhism, standing easily alongside The Diamond Sutra, The Heart Sutra, and a small handful of others.
Our unique edition of Dogen's Genjo Koan (Actualization of Reality) contains three separate translations and several commentaries by a wide variety of Zen masters. Nishiari Bokusan, Shohaku Okamura, Shunryu Suzuki, Kosho Uchiyama. Sojun Mel Weitsman, Kazuaki Tanahashi, and Dairyu Michael Wenger all have contributed to our presentation of this remarkable work. There can be no doubt that understanding and integrating this text will have a profound effect on anyone's life and practice. 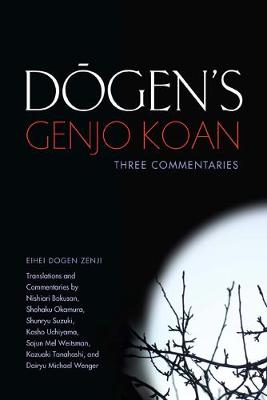 » Have you read this book? We'd like to know what you think about it - write a review about Dogen's Genjo Koan book by Eihei Dogen and you'll earn 50c in Boomerang Bucks loyalty dollars (you must be a Boomerang Books Account Holder - it's free to sign up and there are great benefits!)

Eihei Dogen Zenji was born in Japan on January 19, 1200. Considered to be the founding teacher of the Soto school of Zen, he was the author of many books and tracts, and his most important work, The Shobogenzo (Treasury of the Eye of the True Dharma), was collected into 95 fascicles regarding practice and enlightenment. He died in Kyoto on September 22, 1253.

A Preview for this title is currently not available.
More Books By Eihei Dogen
View All