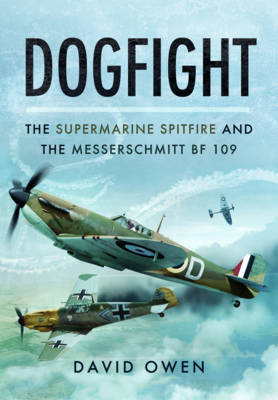 Dogfight: The Supermarine Spitfire and the Messerschmitt BF109

Description - Dogfight: The Supermarine Spitfire and the Messerschmitt BF109 by David Owen

Innumerable books have been published on the two most famous fighter aircraft of all time, the Supermarine Spitfire and the Messerschmitt Bf109. But books setting out to tell the story of both aircraft are very much rarer - probably fewer than the fingers of one hand. Yet their joint story is one which bears retelling since both were essential to the air campaigns of World War Two.

Incredibly, the men who designed them lacked any experience of designing a modern fighter. R J Mitchell had begun his career working on industrial steam locomotives, Willy Messerschmitt had cut his aeronautical teeth on light and fragile gliders and sporting planes. Yet both men not only managed to devise aircraft which could hold their own in a world where other designs went from state-of-the-art to obsolete in a staggeringly short time, but their fighters remained competitive over six years of front-line combat.

Despite the different ways their creators approached their daunting tasks and the obstacles each faced in acceptance by the services for which they were designed, they proved to be so closely matched that neither side gained a decisive advantage in a titanic struggle. Had either of them not matched up to its opponent so well, then the air war would have been a one-sided catastrophe ending in a quick defeat for the Allies or the Axis powers, and the course of twentieth century history would have been changed beyond recognition. 150 illustrations

Book Reviews - Dogfight: The Supermarine Spitfire and the Messerschmitt BF109 by David Owen

» Have you read this book? We'd like to know what you think about it - write a review about Dogfight: The Supermarine Spitfire and the Messerschmitt BF109 book by David Owen and you'll earn 50c in Boomerang Bucks loyalty dollars (you must be a Boomerang Books Account Holder - it's free to sign up and there are great benefits!)

Engineering graduate, University of Manchester, began career working on anti-aircraft missiles in the aerospace industry before turning to writing, film and TV production on a wide range of subjects. These include two series for BBC Television on the 'Thursday War' exercises for newly commissioned warships and on the story of naval aviation, and one for BBC Radio Four on deception and psychology in warfare . Thirty books published to date covering automotive engineering, motor sport, forensic science, espionage, criminal profiling, air crash investigation and anti-submarine warfare. Dogfight: Spitfire versus Messerschmitt Bf109 is number thirty-one.

A Preview for this title is currently not available.
More Books By David Owen
View All