Donald Davidson (1917-2003) was one of the most prominent philosophers of the second half of the twentieth century. His thinking about language, mind, and epistemology has shaped the views of several generations of philosophers. This book brings together articles by a host of prominent philosophers to provide new interpretations of Davidson's key ideas about meaning, language and thought.

The book opens with short commemorative pieces by a wide range of people who knew Davidson well, giving us glimpses into the life of a great philosopher, a beloved husband and father, a colleague, teacher and friend. The chapter by Lepore and Ludwig and the ensuing heated debate with Frederick Stoutland on how to interpret Davidson demonstrate why Davidson's legacy has become a disputed intellectual territory. The chapters by Kathrin Gluer, Peter Pagin, Barry Smith, James Higginbotham and William Child, all eminent philosophers of language, are prime examples of just one strand of this legacy, while the piece by Sophie Gibb gives us an opening to Davidson's enormous contribution to philosophy of mind. Donald Davidson: Life and Words closes with a piece by Davidson himself, first published in 1995 in the International Journal of Philosophical Studies, where he brings together the various strands of his work in a Unified Theory of speech and action.

This book comprises key articles first published in the International Journal of Philosophical Studies and previously unpublished commemorative pieces, and serves as a fitting dedication to the work and memory of a great philosopher.

Other Editions - Donald Davidson: Life and Words by Maria Baghramian 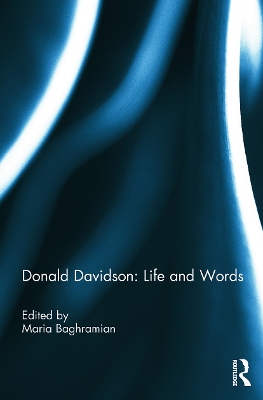 » Have you read this book? We'd like to know what you think about it - write a review about Donald Davidson: Life and Words book by Maria Baghramian and you'll earn 50c in Boomerang Bucks loyalty dollars (you must be a Boomerang Books Account Holder - it's free to sign up and there are great benefits!)

Maria Baghramian is currently Head of the School of Philosophy at University College Dublin, Ireland, and Editor of the International Journal of Philosophical Studies. She has published widely on contemporary American philosophy, relativism and pluralism. In 2010 she was elected a member of the Royal Irish Academy.