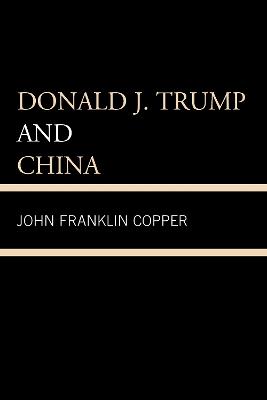 In Donald J. Trump and China John F. Copper examines President Trump's views of China that developed before and after he entered office. As a businessman and as a witness to US politics and foreign policy, Trump realized China was the most important country in the world to the United States. He also recognized that one of the key difficulties in American trade policy was the imbalance between the US and China. Copper argues that Trump blamed policy makers for the disparity and was determined to rectify the imbalance. President Trump undertook formulating a new China policy in spite of nonsupporters in the Democratic Party, the media, academia, and Hollywood. Donald Trump accepted China's rise as an economic power and felt he could negotiate with President Xi to construct a positive relationship that would benefit both countries, save the global financial system, curb nuclear proliferation, and save the environment. Ultimately, Copper asserts that Trump knew a constructive relationship with China would be challenging, however he also understood that this is the nature of big power politics and strategic negotiations and realism would ensure peace between these two powerful countries.

» Have you read this book? We'd like to know what you think about it - write a review about Donald J. Trump and China book by John Franklin Copper and you'll earn 50c in Boomerang Bucks loyalty dollars (you must be a Boomerang Books Account Holder - it's free to sign up and there are great benefits!)


A Preview for this title is currently not available.
More Books By John Franklin Copper
View All