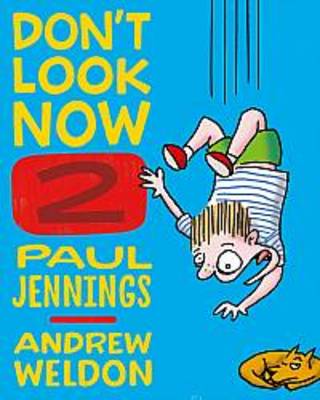 Ricky is an ordinary boy, who can fly. He can really fly! But only when no one is looking. His dream is to one day be FAMOUS. But after accidentally opening the car window at the car wash, he's grounded. No movies, no swimming, no phone. And definitely no flying. But he has a plan. The school concert is coming up and he has the best ever magic trick up his sleeve. Will he wow the crowd, or fall flat on his face?

A brilliant series presented in words and pictures by master story tellers Paul Jennings and Andrew Weldon. Don't Look Now will have readers laughing out loud at Ricky and his hilarious adventures - on and off the ground.

» Have you read this book? We'd like to know what you think about it - write a review about Don'T Look Now Book 2: a Magician Never Tells and Elephant Bones book by Paul Jennings and you'll earn 50c in Boomerang Bucks loyalty dollars (you must be a Boomerang Books Account Holder - it's free to sign up and there are great benefits!)

Paul Jennings has written over one hundred stories and won every Australian children's choice book award. Since the publication of Unreal! in 1985, readers around the world have loved his books. The top-rating TV series Round the Twist and Driven Crazy were based on his popular short-story collections such as Unseen! In 1995 he was made a Member of the Order of Australia for services to children's literature and he was awarded the prestigious Dromkeen Medal in 2001. Andrew Weldon's cartoons have been published in Australia and internationally, including in The Age, The New Yorker and The Big Issue. He has published two cartoon collections - I'm so sorry little man I thought you were a hand-puppet and If you weren't a hedgehog. If I weren't a haemophiliac. His most recent book is Lazy Daisy, Busy Lizzie, created with his partner, Mary Ellen Jordan.