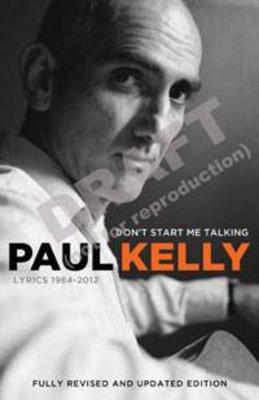 'He transforms the smallest everyday item, a winter coat or holiday gravy, into talismans of redemption and loss, with simple, unadorned language.' - Daren Wang, Paste Magazine

'His voice-sly and warm, laconic and sometimes frail-may be the closest thing we have to a national one.' - Robert Forster, The Monthly

'If I was only allowed to listen to one artist for the rest of my life I would choose Paul Kelly.' - Kasey Chambers

Don't Start Me Talking comprises some of the finest poetry written in Australia. Paul Kelly's lyrics illuminate the way we live, sometimes with a haunting and savage intensity, sometimes with humour, always with a lightness and simplicity that belies the complexity of the world he is singing and writing into being. In addition to his lyrics, Kelly has written songs with and for many other artists, as well as his 2010 award-winning 'Mongrel Memoir', How To Make Gravy. The lyrics encompass his writing over two decades, from 1984 to 2012, and are grouped by album in chronological order. Also included are lyrics that have not been previously published.


Other Editions - Don'T Start Me Talking by Paul Kelly 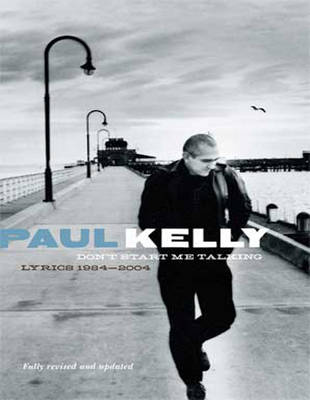 » Have you read this book? We'd like to know what you think about it - write a review about Don'T Start Me Talking book by Paul Kelly and you'll earn 50c in Boomerang Bucks loyalty dollars (you must be a Boomerang Books Account Holder - it's free to sign up and there are great benefits!)

Paul Kelly, born in 1955, sixth of nine children, grew up in Adelaide, was educated by the Christian Brothers and played trumpet and football in high school. He works as a songwriter and singer, writes and produces for other artists and has released twenty albums, including three film scores. He performs regularly in Australia, America and Europe.