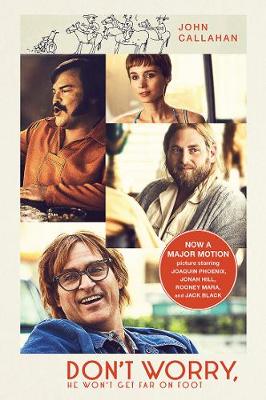 Don'T Worry, He Won't Get Far on Foot Film Tie in

Description - Don'T Worry, He Won't Get Far on Foot Film Tie in by John Callahan

'When people laugh like hell and then say, "That's not funny", you can be pretty sure they're talking about John Callahan.'
P.J. O'Rourke

Is it possible to find humour corrosive, taboo-shattering, laugh-till-you-cry humour in the story of a 38-year-old cartoonist who's both a quadriplegic and a recovering alcoholic? The answer is yes, if the cartoonist is John Callahan whose infamous work has graced the pages of Omni, Penthouse and The New Yorker.

John Callahan was a legend during his lifetime, and his untimely death in 2010 has done nothing to diminish the power of his life story. Callahan's uncensored account of his troubled and sometimes impossible life is also genuinely inspiring. Without self-pity or self-righteousness, his liberating book is both harrowing and hilarious. Featuring more than sixty of Callahan's cartoons, it's a compelling look at art, addiction, disability and fame.

Book Reviews - Don'T Worry, He Won't Get Far on Foot Film Tie in by John Callahan

» Have you read this book? We'd like to know what you think about it - write a review about Don'T Worry, He Won't Get Far on Foot Film Tie in book by John Callahan and you'll earn 50c in Boomerang Bucks loyalty dollars (you must be a Boomerang Books Account Holder - it's free to sign up and there are great benefits!)


A Preview for this title is currently not available.
More Books By John Callahan
View All