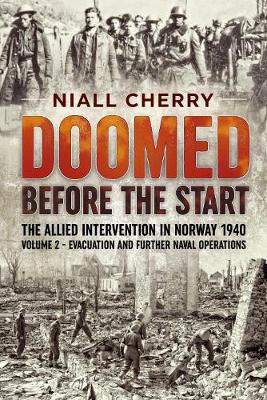 Doomed Before the Start Volume 2

Description - Doomed Before the Start Volume 2 by Niall Cherry

Doomed Before the Start, Volume 2: The Allied Intervention in Norway 1940 - Evacuation and Further Naval Operations

Book Reviews - Doomed Before the Start Volume 2 by Niall Cherry

» Have you read this book? We'd like to know what you think about it - write a review about Doomed Before the Start Volume 2 book by Niall Cherry and you'll earn 50c in Boomerang Bucks loyalty dollars (you must be a Boomerang Books Account Holder - it's free to sign up and there are great benefits!)

Niall Cherry was born in London in 1959 and recalls becoming interested in military history as a schoolboy from watching such classic war films as 'The Battle of Britain' and 'A Bridge Too Far'. He later found out that one of his grandfathers fought in the Great War, serving as a chemical corporal at Loos in 1915 and ended up as a Captain. His father served in the REME in the 1950's and Niall continued in the family tradition by serving in the RAMC. During his time he qualified as a Combat Medical Technician Class 1 and an instructor in First Aid and Nuclear, Biological and Chemical Warfare and ended as a Senior NCO. / Deeply interested in the major conflicts of the 20th Century he has visited numerous battlefields including the Western Front, Arnhem, Gallipoli, Normandy and North Africa. He is a longstanding member of the Western Front Association, the Military Heraldry Society and 23 Parachute Field Ambulance Old Comrades Association. He also has the honour to be the UK representative for the Society of Friends of the Airborne Museum Oosterbeek and membership secretary and a trustee of the Arnhem 1944 Fellowship. Niall currently lives in Lancashire and works for BAE Systems in the aerospace industry.

A Preview for this title is currently not available.
More Books By Niall Cherry
View All

You'Ll be Hearing from Us!: Operation Anthropoid - the Assassination of Ss-ObergruppenfuHrer Reinhard Heydrich and its Consequences
Available, ships in 7-10 business days
$58.50 $65.00