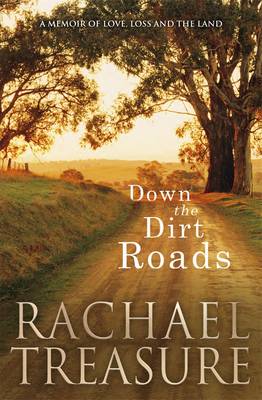 Down the Dirt Roads

Description - Down the Dirt Roads by Rachael Treasure

A powerful and moving memoir about healing, healthy food and hope by Australia's leading rural writer and environmental entrepreneur.

'For me, being in a paddock means anything is possible . . .'

Country girl and bestselling novelist Rachael Treasure had worked hard to build a long-dreamed-of lifestyle on her own patch of dirt in Tasmania's rugged and beautiful wilderness. But through the breakdown of her marriage, Rachael lost her family farm and, in her words, lost her way in life.

Discovering an all-new compass to live by, she took her two kids and her dogs and left the beaten path. Intensive farming, men on the land and women in the home - everywhere Rachael looked she saw ongoing harm to the soil and the foodchain. By going down the dirt roads and getting back to grassroots, she discovered another set of stories about country life in Australia, and a different way to live on the land. From her rebel granny to pioneering farmers and passionate animal handlers, Rachael became inspired by fresh ways to do things.

Down the Dirt Roads starts as a heartfelt and moving insight into the life of a single mother displaced from her home, and becomes a groundbreaking and powerful book about healing, health and hope. Nourishing and sustaining, it presents a practical and positive vision of what life on our land could become.

Other Editions - Down the Dirt Roads by Rachael Treasure 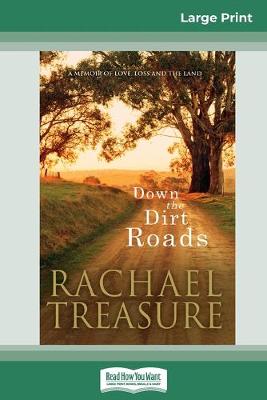 Book Reviews - Down the Dirt Roads by Rachael Treasure

» Have you read this book? We'd like to know what you think about it - write a review about Down the Dirt Roads book by Rachael Treasure and you'll earn 50c in Boomerang Bucks loyalty dollars (you must be a Boomerang Books Account Holder - it's free to sign up and there are great benefits!)

Rachael Treasure gets as excited about microbial activity in the soil as she does by beautiful storytelling. By combining her love for the land and the written word, Rachael sparked a publishing boom in 2002 when her first novel Jillaroo woke the world up to contemporary women's stories beyond the city lights. Rachael lives in Southern rural Tasmania and is a full time mother to two young humans and many eccentric animals. She has been dubbed an agricultural activist, farm feminist and literary pioneer and has worked as a rural journalist, radio broadcaster, truffle sniffer dog handler, professional wool classer, stock camp cook, drover, farm manager and working dog trainer. Her stories have inspired thousands of young and old rural non-readers to read and love books. Her novels since Jillaroo include The Stockmen, The Rouseabout, The Cattleman's Daughter, The Farmer's Wife and Cleanskin Cowgirls. Her short story collections include The Girl and the Ghost-Grey Mare and Fifty Bales of Hay. Non-fiction works include Don't Fence Me In - Grassroots Wisdom from a Country Gal, and a working dog training book, Dog Speak. Her screenplay Albert's Chook Tractor was filmed for SBS Independent TV in the Fingal Valley, Tasmania and is now available as a DVD. She has also co-written songs with Nationally and internationally successful country rock band The Wolfe Brothers. Her latest 'Agricultural Adults Only' colouring book, 50 Bales of Hay, is proving a hit with cheeky farmers and is available at www.rachaeltreasure.com

A Preview for this title is currently not available.
More Books By Rachael Treasure
View All