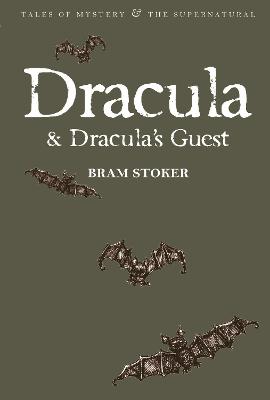 'Dracula': Introduction and Notes by Dr David Rogers, Kingston University. 'There he lay looking as if youth had been half-renewed, for the white hair and moustache were changed to dark iron-grey, the cheeks were fuller, and the white skin seemed ruby-red underneath; the mouth was redder than ever, for on the lips were gouts of fresh blood, which trickled from the corners of the mouth and ran over the chin and neck. Even the deep, burning eyes seemed set amongst the swollen flesh, for the lids and pouches underneath were bloated. It seemed as if the whole awful creature were simply gorged with blood; he lay like a filthy leech, exhausted with his repletion.' Thus Bram Stoker, one of the greatest exponents of the supernatural narrative, describes the demonic subject of his chilling masterpiece Dracula a truly iconic and unsettling tale of vampirism. 'Dracula's Guest & Other Stories': Edited and Introduced by David Stuart Davies. The above is followed with a rich collection of Stoker's macabre tales including Dracula's Guest (which was omitted from the final version of Dracula); a devilishly dangerous haunted room in 'The Judge's House'; a fatalistic tragedy in 'The Burial of the Rats'; a terror of revenge from beyond the grave in 'The Secret of Growing Gold', and a surprising twist in the tail in 'The Gypsy's Prophecy'. Other strange and frightening episodes provide a feast of terror for those readers who like to be unnerved as well as entertained. AUTHOR: It has been said of Bram Stoker's 'Dracula', that it "not only set the standard for subsequent novels in the horror-mystery genre but also helped establish the vampire as one of the most recognizable figures in the popular arts." Stoker (1847-1912) wrote many other works of some merit, but achieved lasting fame through his iconic invention.

» Have you read this book? We'd like to know what you think about it - write a review about Dracula & Dracula's Guest book by Bram Stoker and you'll earn 50c in Boomerang Bucks loyalty dollars (you must be a Boomerang Books Account Holder - it's free to sign up and there are great benefits!)