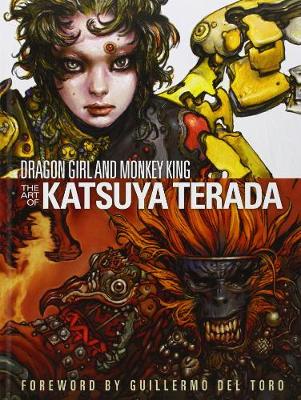 The Art of Katsuya Terada

Dark Horse proudly presents the first English-language artbook showcasing one of Japan's most sought-after painters and illustrators, Katsuya Terada! Dragon Girl and Monkey King collects Terada's art in every mood- sexy, brutal, bizarre, and humorous, including his distinctive Hellboy figurine work, commentary, and an exclusive interview with the artist!

» Have you read this book? We'd like to know what you think about it - write a review about Dragon Girl And Monkey King book by Katsuya Terada and you'll earn 50c in Boomerang Bucks loyalty dollars (you must be a Boomerang Books Account Holder - it's free to sign up and there are great benefits!)

Katsuya Terada is probably best known in the US as the character-designer for the animated film Blood- The Last Vampire. He has also done work related to American comics, such as Iron Man and Hellboy . He also made additional contributions to issues of Nintendo Power, including a special edition Strategy Guide for Dragon Warrior. In Japan, he has done the promotional illustrations for Detective Saburo Jinguji mystery-adventure video game series. e was in charge of the book cover and illustrations for the Kimaira series written by Baku Yumemakura, and was in charge of cover design and illustrations for Garouden, Shin Majugari, and Yamigarishi as well. erada has defined himself as a "rakugaki" artist, more of a philosophy than a style of drawing, in which one draws a little everywhere, all the time, without thinking too much, on notebooks etc. He is a very prolific artist; one of his collections of sketches numbers more than 1000 pages, appropriately called Rakuga King. e has done very little group-drawn work (an exception being the manga Saiyukiden Daienou (Monkey King), his principal activiti

A Preview for this title is currently not available.
More Books By Katsuya Terada
View All