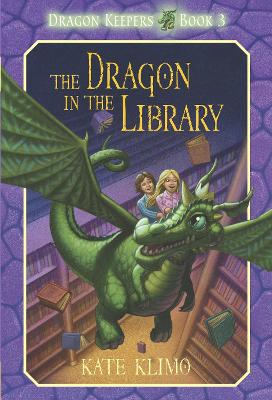 Emmy, their rapidly growing dragon, has become a real grouch, saying she's missing something, and the cousins don't have a clue what that something is. Jesse and Daisy go online to ask Professor Andersson, their favorite dragon expert, for help and end up seeing him being kidnapped!

The kidnapper is none other than Sadie Huffington, the girlfriend of their enemy, St. George the Dragon Slayer. She has hatched a wicked scheme to use the professor to both find St. George and capture Emmy. Now the dragon keepers and their dragon must storm Sadie's castle and rescue the professor from the witch and her pack of vicious dog-men!

In this third fantasy book in the Dragon Keepers series, Kate Klimo introduces readers to a magical library filled with shelf elves and reveals the secrets of the gigantic red book that Jesse and Daisy discovered in The Dragon in the Sock Drawer. She keeps the action and adventure flying while bringing both heart and imagination to this tale of two kids and a dragon, growing up together.

The Dragon Keepers series is perfect for kids who crave books about dragons and magic but are caught betwixt and between--too old for Magic Tree House and not yet ready for Eragon and the Inheritance cycle.

» Have you read this book? We'd like to know what you think about it - write a review about Dragon Keepers #3 book by Kate Klimo and you'll earn 50c in Boomerang Bucks loyalty dollars (you must be a Boomerang Books Account Holder - it's free to sign up and there are great benefits!)


A Preview for this title is currently not available.
More Books By Kate Klimo
View All