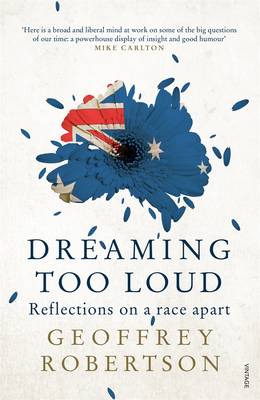 Christopher Hitchens described Geoffrey Robertson as 'the greatest living Australian' and the satirical magazine Private Eye calls him 'an Australian who has had a vowel transplant'. Just before he was to cross-examine Princess Diana, the London Times complained that he was 'anti-establishment, republican and Australian' - in ascending order of horror.

Internationally recognised as one of the world's leading human rights lawyers and as an intellectual inspiration for the global justice movement, he regularly boomerangs back from leading Europe's largest civil liberties practice to the land of his birth and his youth. Just as his Hypotheticals dazzled television audiences, so the speeches and essays collected in this book provoke, disturb and entertain.

Here you will find new heroes in our history, such as the schoolteacher who stopped Ned Kelly's planned terrorist atrocity at Glenrowan, and the squadron leader who led 'the few' - the airmen who held the Japanese at bay after the fall of Singapore. There are insights into Australian education, the story of wrongly jailed Aboriginal mother Nancy Young, encounters with Vaclav Havel, Rupert Murdoch, Michael Kirby, John Mortimer and Julian Assange, the transcript of a previously banned Hypothetical, reflections on worldwide problems such as torture, terrorism and the Catholic church, and much else besides. With his trademark intelligence, humour and humanity, Robertson's expatriate (but not ex-patriot) vision picks the real winners and losers in the Australian race.

» Have you read this book? We'd like to know what you think about it - write a review about Dreaming Too Loud book by Geoffrey Robertson and you'll earn 50c in Boomerang Bucks loyalty dollars (you must be a Boomerang Books Account Holder - it's free to sign up and there are great benefits!)

Geoffrey Robertson QC is recognised as one of the world s leading human rights advocates, whose work as a barrister, author, judge and television personality has been central to the global justice movement. Born and educated in Sydney, and then at Oxford as a Rhodes Scholar, Mr Robertson has had a distinguished career at the English bar, as a Queen s Counsel and as founder and head of Doughty Street Chambers, Europe s largest human rights practice. He has appeared in many celebrated cases, prosecuting Hastings Banda and General Pinochet and defending Salman Rushdie, Mike Tyson and Julian Assange. He served as first President of the Special War Crimes Court in Sierra Leone and in 2008 was appointed by Ban-ki-Moon as a distinguished jurist member of the UN s Internal Justice Council. In 2011 he was awarded the New York Bar Association s prize for achievement in international law and affairs. Mr Robertson is a Master of the Middle Temple and visiting professor in Human Rights Law at the New College of Humanities. His books include The Tyrannicide Brief; Media Law; Does Dracula Have Aids?; Mullahs Without Mercy; The Case of Th