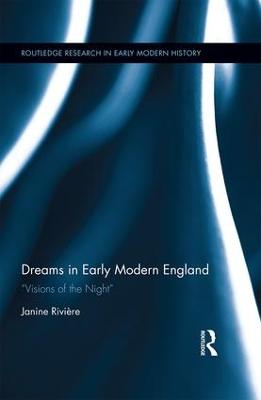 Dreams in Early Modern England offers an in-depth exploration of the variety of different ways in which early modern people understood and interpreted dreams, from medical explanations to political, religious or supernatural associations.

Through examining how dreams were discussed and presented in a range of diffrerent texts, including both published works and private notes and diaries, this book highlights the many coexisting strands of thought that surrounded dreams in early modern England. Most significantly, it places early modern perceptions of dreams within the social context of the period through an evaluation of how they were shaped by key events of the time, such as the Reformation and the English Civil Wars. The chapters also explore contemporary experiences and ideas of dreams in relation to dream divination, religious visions, sleep, nightmares and sleep disorders.

This book will be of great value to students and academics with an interest in dreams and the understanding of dreams, sleep and nightmares in early modern English society.

Other Editions - Dreams in Early Modern England by Janine Riviere 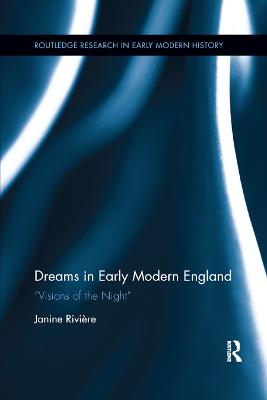 » Have you read this book? We'd like to know what you think about it - write a review about Dreams in Early Modern England book by Janine Riviere and you'll earn 50c in Boomerang Bucks loyalty dollars (you must be a Boomerang Books Account Holder - it's free to sign up and there are great benefits!)

Janine Riviere, received her PhD in History from the University of Toronto, Canada in 2013, where she has also been teaching since 2004. She has published widely on the topic of dreams and nightmares in early modern England.

A Preview for this title is currently not available.
More Books By Janine Riviere
View All