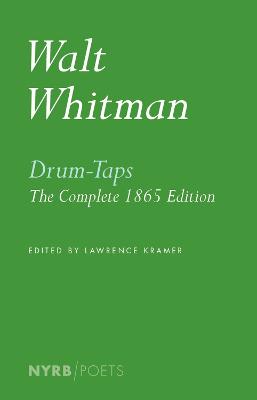 Drum-Taps was written during the Civil War, "put together," as Whitman wrote to a friend, "by fits and starts, on the field, in hospitals as I worked with the soldier boys." As soon as the war ended in 1865, Whitman published the book, which includes some of his tenderest and most haunting poems, along with the great elegy for Lincoln, "When Lilacs Last in the Dooryard Bloom'd." All the more extraordinary then that the book as Whitman originally conceived it has not been reprinted in the 150 years since it first came out. Whitman himself decided to break up the sequence when he incorporated the poems into the larger fabric of Leaves of Grass, and in doing so the more personal, urgent, and immediate-diaristic, reportorial, outraged, grief-stricken-character of the original text was obscured. Lawrence Kramer's new, annotated, edition of the first edition of Drum-Taps re-introduces readers to one of Whitman's greatest achievements, a profoundly moving work of witness, courage, and lament.

» Have you read this book? We'd like to know what you think about it - write a review about Drum-Taps book by Lawrence Kramer and you'll earn 50c in Boomerang Bucks loyalty dollars (you must be a Boomerang Books Account Holder - it's free to sign up and there are great benefits!)

Walt Whitman (1819 1892) was a poet, journalist, and essayist. His work Leaves of Grass, which included a few scattered poems from Drum-Taps, is considered a landmark of American literature. a Lawrence Kramer is a musicologist and composer and a professor at Fordham University. He has been the editor of the journal 19th-Century Music since 1993 and has written more than ten books on music, most recently Expression and Truth- On the Music of Knowledge. He lives in New York City.

A Preview for this title is currently not available.
More Books By Lawrence Kramer
View All

Critical Musicology and the Responsibility of Response: Selected Essays
$75.59 $83.99